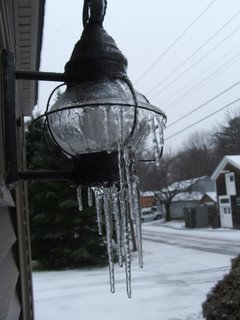 Beach weather?? well, that's what Kas told me this morning... she, Nate and Charlie were heading to the beach... course... that IS in North Carolina!!!

Here at home it's a little different. I had been waiting all weekend for the SNOW that was promised us. First reports were saying 6 plus inches... I was excited.

But at 6:00 am, it proved to be slightly disappointing, instead of a world of white, we have a world of "clear"... ice that is. And as the day has gone on.. its continued to be just that. We did get a little snow mixed in, which has been good, because it has given us some footing. Taking the dogs out has been nothing short of interesting... the words "NO PULL" certainly apply!!! Dog class tonite has been cancelled, I just can't risk anyone getting hurt trying to make their way to dog class... along with the warnings of tree branches coming down and the possibility of loosing power!!

So, its been a bit depressing in the snow department this year in Maine. I know we still have a couple months to go, and we may get something yet... but at this point and time... let's just get on with spring!!!!