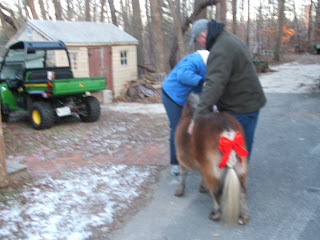 So, what's the fun of living in a small town, unless there are "small town things to do"... and fortunately, there are!!! One being the little Christmas parade, which happens the first Saturday in December. The parade lines up on our street and proceeds thru the center of town... not a long route, but enough for those who are involved----- a few floats, brownie and cub scouts, a couple of firetrucks... you know the drill.

Thinking about that, I decided that this year's parade needed a horse!!!! Besides, what little girl doesn't wish for a pony for Christmas? And I thought Miss Mocha n 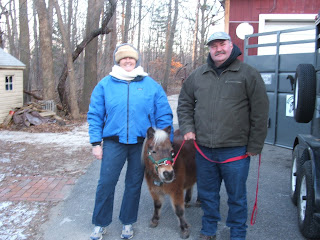 eeded to do something to "earn her keep". So, we brought her home, and got her all decked out!!! Sadie started with her tail, putting a nice french braid in it, and we topped it off with a big red bow. She wasn't too sure about it at first, but figured out it wasn't going any where and just dealt with it.

It was VERY cold for this parade... the temps were in the teens, with a lively wind blowing. I almost gave up on the idea, but had come to far to quit. So threw on an extra layer of clothes and tried to be brave!!!! Mocha had a thick winter coat, so no worries about her!!!! 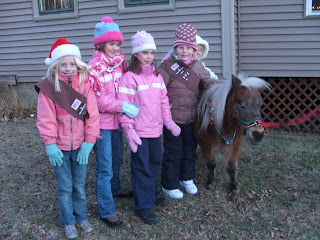 While we were wait for the parade to begin, a little group of "brownies" just had to have their picture taken with our girl!!! These little gals were just in love with her and kept telling me how lucky I was to have Mocha. I totally agreed with them.... I remember being just their age and always hoping for a pony of my own!!!!

The parade begins at sunset, that way, you can enjoy all the lights. We put set of sleigh bells and some lights on Mocha!!! a little hard to see in the picture, but they were a big hit... so was she!!! Some town folks recognized me, but Mocha was certainly the star. She walked along quite well, until we got into

the center of town. I don't know if it was the crowd or the loud speakers, or simply just having "enough", but she started to act out a little bit. Fortunately, she doesn't weigh that much and I can just "bump" her a couple of times and usually get her to behave, and we made it thur without too much fuss... but I have to say, I was pretty happy that wasn't Tonka on the end of that lead rope and acting out like that!!!!

The good thing was... Ed followed us in the gator... Ed, Sadie, Matt and Kate (Sadie's college roommate) all decided to ride along. We put a "scooper" in the gator just in case, and I knew there were a few extra "horse folk" back there in case Miss Mocha decided to be really naughty!!!! Guess she thought that Santa might be watching, because except for that one little glitch.. she was quite perfect. At the end of the parade a number of people came over to see her and give her some pats and hugs.... Then we loaded her back into the trailer and home to Teresa's for supper!!! She was pretty happy back in her barn... all that celebrity stuff really isn't her thing!!!!

And that makes another chapter in the" Mocha book:... she has been to camp, to school, to church and now in the town parade... I really need to get that book written!!!!!!