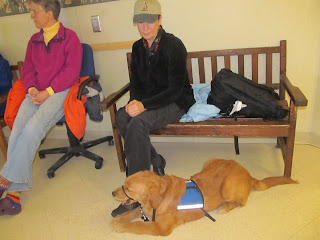 February's check in day at NEADS. and (sadly) for me, another "puppy-less" check in. It was time for Norton to "visit" the vet and so, we dropped him off on our way in. Actually, Mr. Norton has had his "head in the clouds" these past couple of weeks, so I am just as happy to have "this" over and done with, so we can get back to business.

Per our usual routine, we met with Dave in the training room, to go over questions and evaluations on the dogs. Otis and Stoney were the main topics, and the count down is on for their turn in dates. Sweet little Vickie joined us again this month (can you tell that I am just in love with her??) and her puppy raiser is reporting all good things. So, that's good to hear. The word on Ginger is still promising as it is with Leo and T, and we're expecting to see these three Maine dogs at the fall graduation - if all stays on track. So exciting!!! 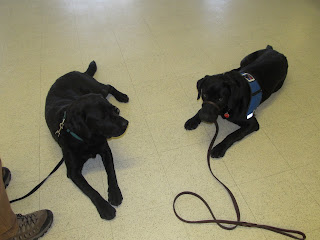 Otis and Edgar just hung out while the humans chatted... they seem to have the bored look about them. 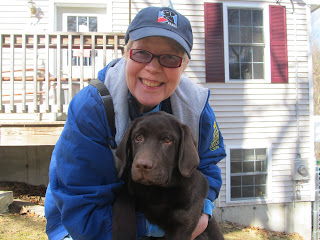 However, before we headed into the city this time... Kathleen had to pick up her new "charge"... we now add Monty to the Maine group!!! a cute "little" chocolate lab, 4 months old!!! Kathleen likes the goldens, but deep down... she is really a lab fan.. so this upcoming year will be great fun for her!!!! 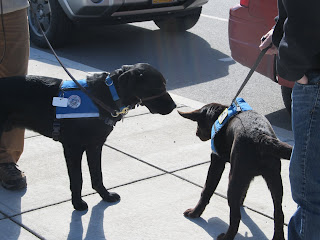 Otis, giving Monty the check over. (you can see now why I said "little".. Monty is one good sized puppy). 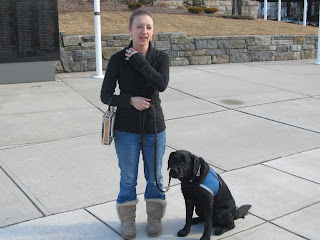 Randi and Stoney on the city streets. And yes, she is only wearing a sweater in February!!! The day was almost like spring, and it's hard to think that we really aren't out of "winter" just yet.... 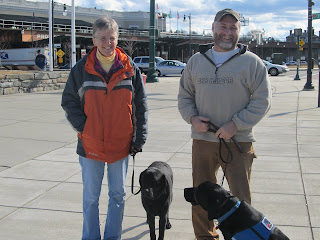 Bernice came along as well (even though she is puppyless too).. but she is waiting until the fall to take on another charge. She enjoyed puppy raising, but has a busy summer ahead. And of course, Rick working with Otis.....we have such a fun time together. 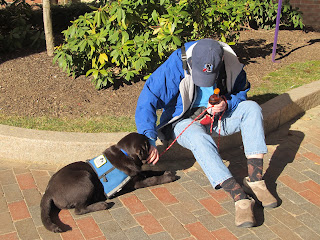 While the others went to work in the hospital, Kathleen chose to stay outside with Monty. It gave them a chance to get to know each other, and being such a little guy and with so much exciting, she thought it best to keep him out and now "allow anything to go wrong" inside (so to speak) 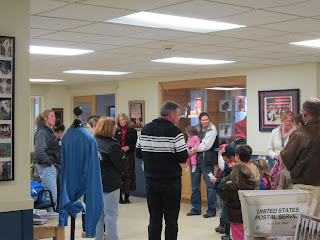 As we were getting ready to leave, a group from the scouts came to take a tour of NEADS. This being school vacation week, it's been pretty busy there with tours of one kind or another. So good to see young kids having the chance to learn about service dogs and the work that they do. Too bad I didn't' live closer to NEADS, I would love to volunteer and take groups threw like this.
but, I guess puppy raising will have to be my "gig"...
Posted by sue at 9:40 AM No comments: