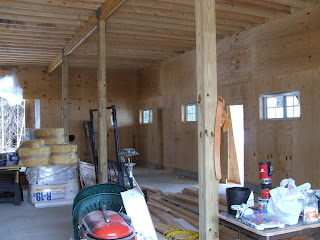 Despite the muck and the mud, work continues nicely on the barn. The interior walls have been boarded up now and Ed is working on the wiring and the pre-plumbing. The days go back and forth between outside work and inside work.. depending on the weather. It won't be long now, before this "open" side will be enclosed with stalls.

Which reminds me... I haven't told you all the "stall" story. We were told that there is a company in Eliot who basically builds barns, and that if you hit it "right" you can sometimes find "bargins" in their scrap pile. So, Ed and I took a ride over. We told them what we were looking for and as "luck" would have it, they said they might have just the thing.

A client of theirs had four stalls in a barn, but, they did not like the fact that a bit of rust was coming up on the stall doors... so, the client had the company come back and take all the stall out. Everything (including all the hardware) was sitting in a pile... we looked it all over, and the little spots of rust that were the complaint, didn't bother us in the least.... so, we bought all four stalls for a fraction of what they would cost new!!!! There were even guards for the windows!!!!! Fortunately, Ed got the stalls up to the barn before mud season... because it is highly unlikely he would get the trailer in now!!!! 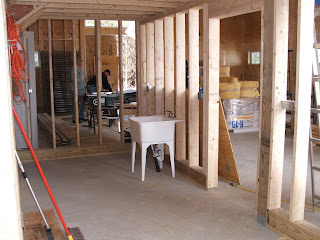 Here is a view of the tack room..... the sink is one that Ed brought home from who knows where... but he has had it for all this time, sitting in a box and just waiting to be used....

THIS is just the thing he likes to talk about when I get on him about being a "pack rat" and wanting to save everything!!!!! 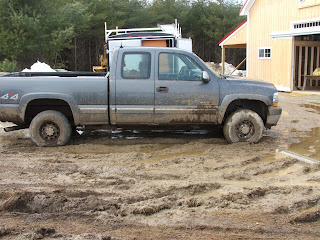 the game is flyball 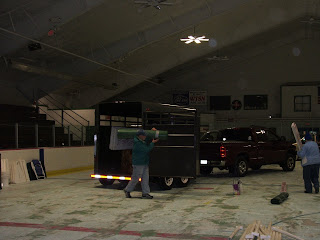 this past weekend, my dog club (Piscataqua Obedience Club) and our flyball team (Maine Coast Runners) were the hosts to a new england regional flyball tournament. This is the fifth year that we have hosted a tournament and they get better and better each year. As usual, our horse trailer was pressed into service to transport mats, jumps and the various equipment that is needed. I love pulling my trailer and so, am more than happy to help out in this department.

I used to play flyball with Moxie, but sadly (and rarely does this ever happen) she was "hit" by another dog from another team that we were racing. After that, she would not play.... we tried for months to get her back in the game, but she was either too smart or too scared and never went back. I did pull Trevor out for awhile, and he picked up enough points for the first two titles, but somehow after that, I guess I just lost interest and now, am 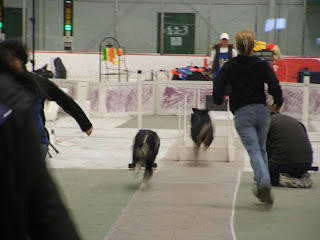 more of a "moral support" to the team.

For those of you who may not know what this is all about.. here's a quick run down. You have a team of four dogs racing another team of four dogs... it's a relay race. The idea is to have the dogs jump over four jumps to a box that has a ball in it, the dogs catch the ball and race back and the next team member is sent. The team that gets all their dogs down and back and have no mistakes... wins the h 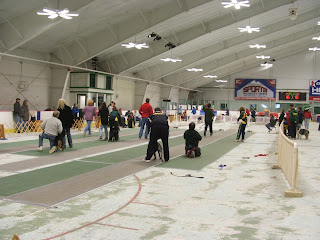 Any dog with a drive for running and fetching can play. And since the height of the jumps are based on your smallest dog, teams often look for little ones to play.. they are called "height dogs"... which is what Moxie and Trevor were. Really fast teams can do all of this in about 16-18 SECONDS!!! (which is hard to get a good picture of the race, the dogs are just way too fast!!!) Each race is worth is certain number of points and as dogs wrack up the points, they are awarded different titles.

There were 39 teams that raced this year... they came from all over new england and we even had a couple of teams that came down from Canada. 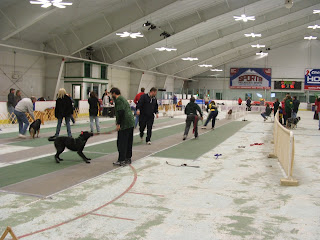 It is great fun, and I do miss having a dog to run. I sort of am toying with the idea of bring Trevor out and see what he thinks of all of this. He is "crazy" about a ball, and now that he is older, perhaps he will be a bit more settled than he was in his younger day. We'll see...

but, it made for a fun weekend, it was nice to see a lot of my "old" flyball friends and have dinner out with the group... and, as with anything of this size... plans for next year are already in the works.....