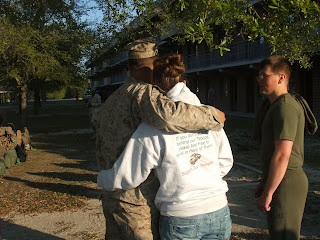 Today is "military spouse day".. and it's the first official one. Next year, you will see it printed on your calendars... like Mother's Day is... and it will be on record as an "official day"! It make me happy and proud to think that the spouse's- who are the main support of our troops- are going to have their own special day.

Here, because of Kas, when I hear the word "spouse" I immediately think "wife", but actually I know better, because there are a huge number of the men folk that are the spouses, and are keeping the home fires burning while their military personal are away.

However, no less should be said about the families either!!! and not just the kids... or the "in-laws", but the "family" that raised that person to become the people that they are!!! 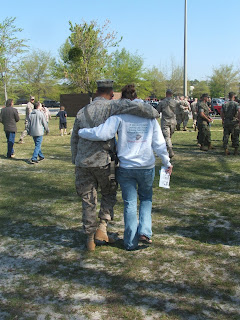 Raising kids is tough... I can say that... I have had the experience. It's tough enough to raise them "decent".... there is nothing "average", about raising an "average kid". We already have so much "against" us just outside the house doors. So, how do you do that... not just raise that "average, good kid", but someone who is willing to take that one step more and go onto something like the military.

Well, I have two answers to that.... number one is God... having a strong relationship with the Lord, knowing where you belong with Him is the bigger part, and then second is the child. There has to be something "different".. something "special" about a kid that is willing to take on this responsibility. Those two things have little to do with how they are raised, except for the fact that their parents recognized this, in some manner, and did their part in pulling it out and nurturing it.

So, as much as I say "hurrah" for the spouses, may I also say "Hurrah" to the families..... like Deb and Dave..... who raised such amazing young people.. and who will ever be, the quiet strong force behind what really keeps this country... (keeps us)....safe in our beds at night, and our daily business at day..........