a visit to Dollywood

After our "not so comfortable night, and Camille had to sleep in the truck", we arrived late in the day at Pigeon Forge, TN. I knew we would have a "Camille can come in "room this evening, because I had been calling ahead. We found a very nice Super 8, that was not only pet friendly, but was also just one traffic light away from the road that took us to Dollywood. We had two main reasons for our trip - other than our anniversary - one to visit with our friend Glen, and the other to visit Dollywood again. We have been there twice before, once in the late 80's when she had only opened the park a few years before and the other was in the mid 90's when we took the girls back and went to Dollywood with Glen and his kids. I guess what I really like about the park is other than the usual theme rides (and there are plenty).. Dolly "saved" this park and area, the park was close to going belly up and the economy in this area was very bad. When she took over the park, both thrived. It is also a place where she has young musical talent come and perform and often it's the break that they need, she has a whole section of the park that is dedicated to the old crafts of the mountains, and she also has an eagle rescue that she is very involved in. So, needless to say, if you really 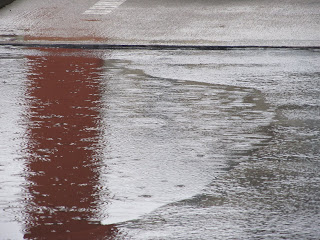 aren't the scary ride sort of person (and I am not) there is plenty to do and see.

Monday morning we awoke to this... pouring - pouring rain!!! Tropical Storm Lee had come to Tennessee just about the same time we did. Sadly, Dollywood is open part time this time of year, and Monday being that day. So, it was either go in the rain or forget it, and not go at all. Since I already said, this was on of the reasons for our trip... it meant going in the rain. 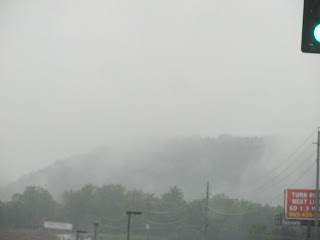 The Great Smokey mountains were certainly living up to their name that day!!!! 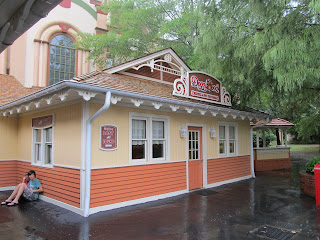 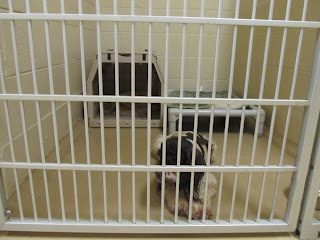 The runs were quite nice, and the building was cozy on this rainy day. Camille was certainly going to have a drier day than us. You need to return to check on your dog every so often, but I didn't mind doing that. I told Cam she was going to have a good day, but she didn't totally agree with me.... 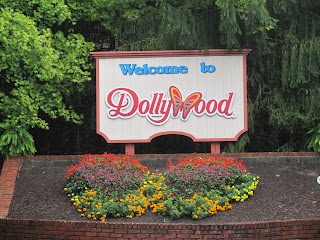 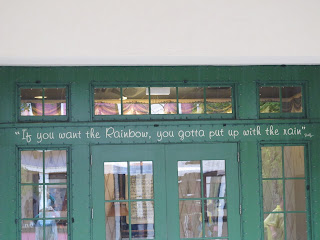 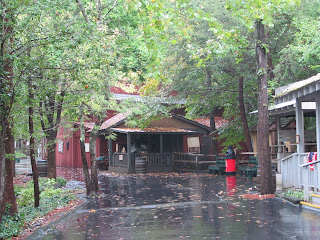 It's a beautiful park, even in the pouring rain. The good thing is, there are places you can duck into and we certainly did. The weather went from everything to heavy mist.. to pouring rain.... 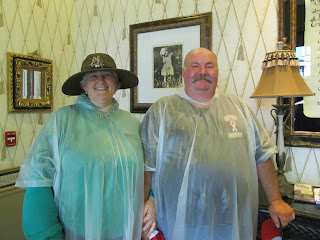 We picked up a couple of those "plastic bags" just to keep some of the rain off.. and actually they worked pretty well for most of the day. (though I think my hat weighed about five pounds before the day was over) Oh well... Happy Anniversary to us... we have com thru rain before!!!! 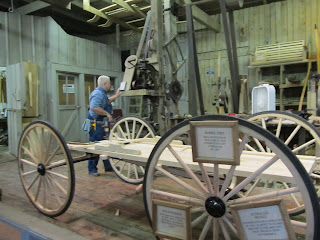 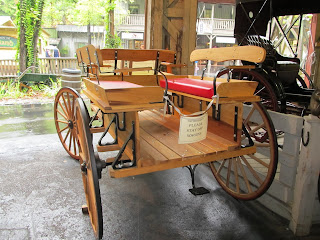 It would be so cool if we could have bought a buggy like this to bring home. 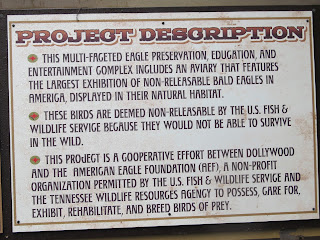 This is the eagle rescue. Dolly is quite involved with this, and they have released several hundred bald eagles back into the mountains. They also serve as a home for the birds that can not be released back into the wild. 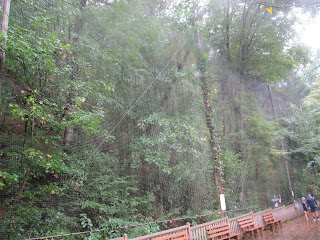 This is the eagle "pen" 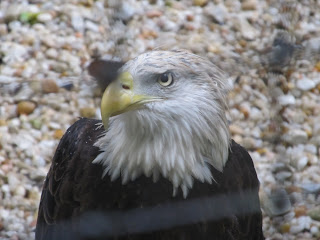 And the birds look fairly happy... there are also a couple of nesting pair. Eagles mate for life by the way..... 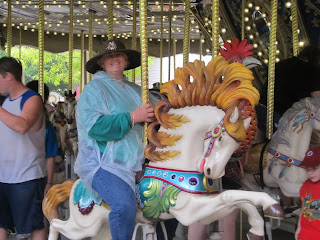 We did try a couple of the rides. I am a HUGE fan of carousels.. and anytime that I can ride one... I do!!! This was a beautiful carousel and it was hard to pick the "perfect" horse. I finally chose this noble steed, because I liked his "wild" mane... kind of reminded me of Ginger (and her wild hair). I was the only adult riding, but you know... I didn't really care!!!! 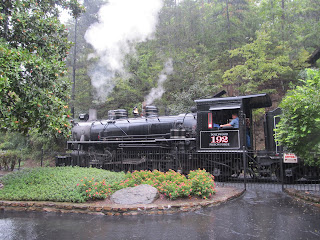 The train was a nice rid as well, it's a real steam engine.. and it takes you for a nice ride aorund the park and a bit into the moutains. 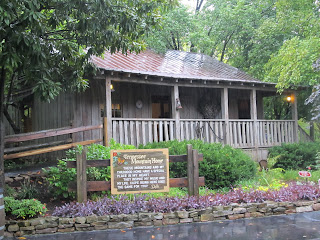 This is a replica of the cabin that Dolly Parton was raised in. I guess the real one still stands.... according to what we were told, it housed 13 people at one point in time.... thinking it's about the size of our little camp, and the fact that we lived in th littl camp one summeer with just three adults and one baby (plus dogs)... makes me appreciate how it might have been. 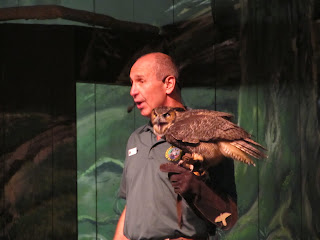 The last show of the day was about the various eagles and other birds of prey. It was very good and I enjoyed learning about them, and watching them fly 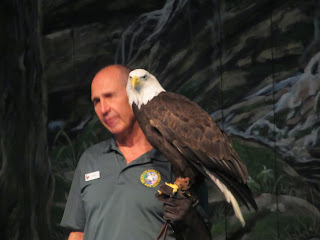 Course, the bald eagle was the most stunning. They do thse shows all over the country, and it was so fun to see the birds up close and personal 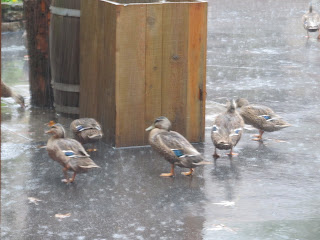 The park was getting ready to close, Ed and I were about as wet as we could be. And as we were walking out, the heavens opened once again... we were pretty happy to be going "home". However, this one particular family didn't seem to be in too much of a hurry.


We got Miss Camille from her place in Doggywood.... climbed into the truck and rushed back for a couple of hot showers and a comfortable bed. Despite the rainy weather it was a really good day, and we have already made plans to bring Abbie here when she is a bit bigger.... 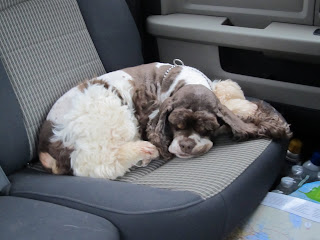 First day of our trip.... NOT as smooth and unstressful as I had hoped. I probably did not make the wisest decision to bring Camille with us. Nothing do with Camille herself, she is a great little traveler.. just that for the most part, we are NOT a dog friendly place, and finding hotels/motels that will take a dog can be tricky. Also the fact that we were traveling on a holiday weekend..... began to cut out chances way down.

We got a late start because I had to work in the morning, And after that, we still needed to take the other dogs down to Kas and Nate's. So it was close to 3:00 before we were really traveling. We got about six hours in and began to look for a place to sleep. The first stop, we found only one place that would take a dog... however, the bigger trouble was... the whole town was filled with work trucks... electrical and tree. Crews that had traveled to New England to help with storm damage... never thought about them!!! The one place that would take us and Cam, (full with work crews) suggested that we travel another hour south and see if we could get away from the damage area. 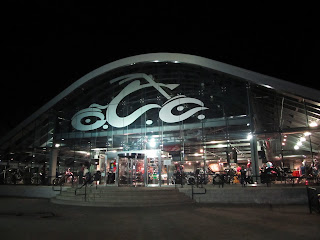 So, on we went. This stop was no better.... I didn't even get to ask about Cam, because we were told.... "HUGE soccer tournaments in the area" all hotels had been booked for weeks.... best keep heading south.

We didn't find a hotel, but we did come across the "Orange county choppers"... yup the real ones that are on TV!!!! 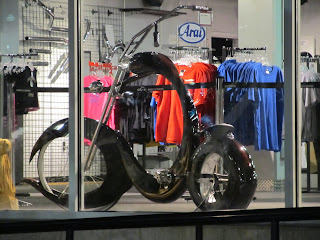 Sadly, they had closed about 10 minutes before we came across them, it would have been fun to poke around their place... but we had to do with looking from the outside in. 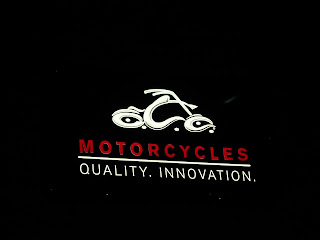 I didn't realize that they weren't that far away from us (about six to seven hours) so, sometime this might be a fun weekend thing to do. Drive down (without dog!!!) find a place to stay, and visit.

It was getting really late. I was beginning to think that we might really have to pull over and rest in the truck. But finally, one place that had just a couple of rooms open.

It was "ok".... clean, but beds as hard as bricks, and guess what - no dogs!!! Ed was so tired that he said he had to take it and just lay down for a few hours. So, we took it and Cam found herself sleeping out in the truck (I couldn't even sneak her in because you had to walk by the front desk to get to the room) Several times I went out to check on her. About the third time threw the night clerk wanted to talk. She went on and on about "why" they didn't take dogs (like I care) I was tired and mad... and then I asked her - what about a service dog. She said "well, they had one room that they would let a service dog in - and only if the room was available". I asked, what would you do if that room wasn't available, and she said - "probably tell them no dog"... really???? it's three o'clock in the morning, I am tired, mad and now you're telling me that you would break the ADA laws... it was more than I could handle and I went back to the room before I got myself in trouble and got us kicked out. Goodness, the public needs some major education with service dog laws!!!!! 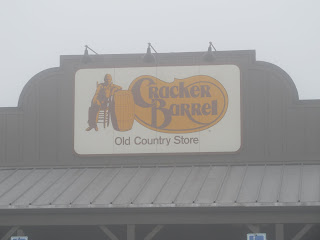 Needless to say, we were out of there first thing in the morning. Ed got some sleep (I got none) and we just wanted to be on the road. The weather was grey, but a welcomed sign began to make us feel better. Breakfast at Cracker Barrel.... maybe day two of this trip would be better. 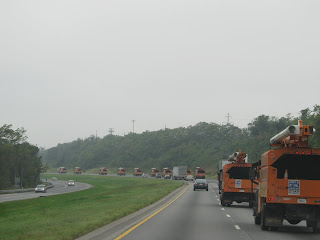 Grateful to all the crews that helped during the storm. We had no power for four days, so I am happy to see extras... but when we saw this line of trucks, no wonder there weren't any motels to be found last night!!!!! 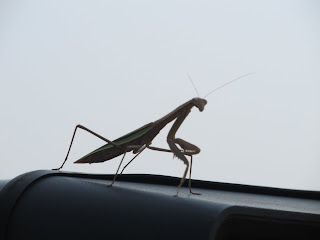 We stopped for fuel and found this beautiful creature... a praying mantis.... I'm taking him as a symbol of "good luck" for the rest of the week!!!!