Late Friday evening, we got a call from Butch. He wanted to try and come to see us on Sunday, and see about getting Tonka and Duke together as a team. We actually had several plans for Sunday, but I told him that if I could "clean the calendar" I would let him know. We had to find someone to do ushering at church for us, and I had to re-arrange a drop off with regards to a foster cocker spaniel, but a few phone calls and we managed it. Butch was also looking for some hay.. they haven't had any "hay days" where they live and he was getting a little bit panicky about his hay situation... another phone call (to Belinda) and we even had that "problem" solved!!! 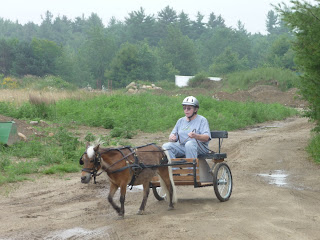 I got to the barn fairly early Sunday morning, wanted to get the chores done, and even take Mocha out for a little drive before the arrived. Betty was there too, and and we got those things done. Becky and Butch arrived around 10:00.. we chatted for a bit and then went to work. 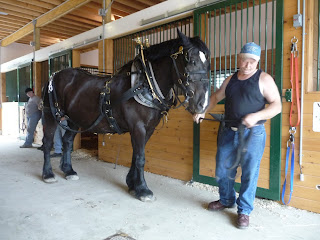 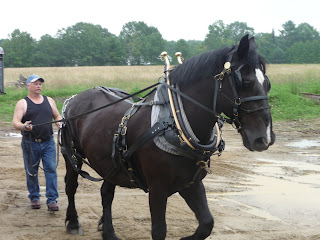 Since Butch really had not worked with Duke much, and I have been having some trouble with him, we started there. Duke can be a bit strong with me, and also has this "habit" of just heading to (and in) the barn whenever he likes... and when 1800lbs is heading to the barn... it takes something to change his mind. Butch decided to try another bit in his mouth (kind of like a pinch collar on a dog) and that did help alot. Then we did a good amount of ground driving, up and down the drive and out along the street.. we must have worked a good two hours, and I had the chance to work with Duke in the barn yard and convince him (with Butch's help) that we DON'T ever go in the barn, unless the human says so!!!! 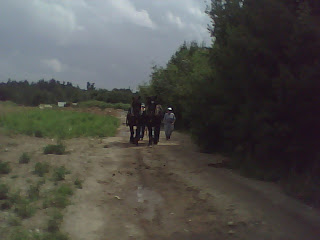 After that, we took a lunch break, and then pulled Tonka out. He was in a good mind, and we did just a bit of ground driving with him and Butch felt that we could begin our "team training". At first, he drove Tonka and Becky took Duke and the two of them ground drove around the farm, keeping the horses side by side. Then Butch put the boys together and ground drove as a team. They looked awesome, and got along quite well with each other. 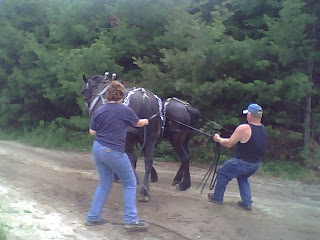 The next step was seeing how Tonka (mostly) felt about have a pole placed between the two of them, Butch found a long "stick" left over from house construction and as he drove them, he would slide the stick up between the two of them. Neither horse had anything to say about that. So, it seemed like a cart would be next in line.
Butch started with our two w 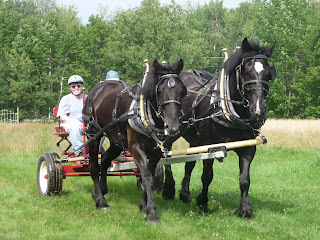 heel fore cart. He felt that if he got into any trouble, it's easier to handle the horses with a smaller vehicle. At first he drove the cart from the ground, but with in a very short time, he jumped into the cart and he and the team were off. He made several loops around the field and the boys looked like they had been a team their whole lives. You can't even begin to know how excited I was when Butch came by and said..."hop in with me"... and away we went. What a thrill to be riding behind that team... OUR team!!! I have waited such a long time to do something like this. I did some driving with them.. which is a bit different from driving a single horse... and then Butch took turns taking everyone for rides. It was good practice for the team, and such fun for all of us. 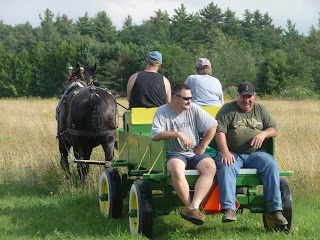 Nothing doing though, I just HAD to see the guys in front of that beautiful wagon that Dave made for us. Besides, Dave was there and I so wanted him to see the team with that wagon, and get one of the very first rides!!! While the team rested, Ed, Dave and Butch took the pole set up off the fore cart and put it on the wagon. Then the three of them hitched the boys to it (we took the extra help in the hitch, just because there were some adjustments to make and also to be sure the boys were going to be good with that wagon!!!)

Again, Butch made a coupl 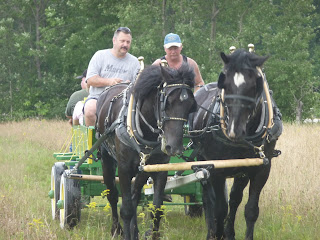 e of passes around the field with just him and the team, and then came by and said..."hop in!" I jumped up front, and Ed and Dave hopped on the rear, and away we went.... and that gorgeous wagon rolled along perfectly!!! We probably spent another hour or so working with the wagon and the boys, everyone (well, Dave, Butch and I) taking turns driving the team, and simply enjoying the efforts of our work. I was a wonderful afternoon and certainly a day that I will not soon forget.


As we were beginning to finish up, a thunderstorm rolled thru, so it was a good time to wrap it up. The boys were getting tired (especially poor Duke who had been in harness all day) Becky and Butch sill needed to pick up their hay and drive the two hours home again, and it was already 6:00pm.
Now, "ALL" I have to do is continue to work where Butch left us off... sadly, Monday and Tuesday were already jammed packed with things that needed to be done... so, I didn't get to working either of them then... maybe today, I can get somebody out... there's just never enough time!!!
Also, I haven't said too much about it, but Ed is being bothered with kidney stones again, and has to go in for another "blasting" next week. This is his second round of "blasting".. he had to do this a year ago, so that is weighing on my mind, and I am always watching him to make sure he isn't over doing it... especially with working on the house... we both will be glad when he gets this behind him.