the day before the clinic... 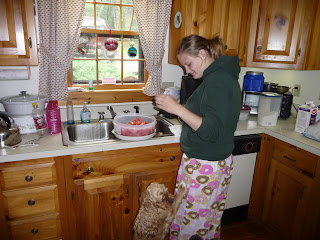 Even though we have been planning this driving clinic for months and we have been preparing for weeks, there was still much to do today with lots of last minute things. We were all up bright and early.. Ed headed to the barn to begin chores, and Sadie and I went to work in the kitchen. I pre made supper for this evening, and she got to work making salads (fruit in this photo). The morning was grey and rainy... it poured in the night... but there is a promise of a good weekend..... what a blessing!!!!

I headed to the barn, leaving Sadie to do the picking up around the house.... and took the guinea pigs with me. I have been wanting to move them to the barn for the past week, we need to be out of this house just after the clinic and the "poor piggies" haven't gotten much attention lately.... I kept them in the cellar of this house, and just didn't handle them as much as I used to. I figured that living in the tack room, they will get a lot more attention, and it's a good place to have them until we move into the house. 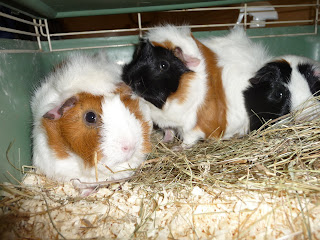 They were a bit shy at first in the new surroundings, and not too sure of all the "traffic" back and forth in front of their cage. But after a couple of hours, (along with some nice hay and some sprigs of fresh grass) they were out and about, squeaking their little sounds. I wonder what Annabelle will think of with her new roommates!!!! Just so you know, the Mama pig is the one on the left, and her two babies... Curly and Penny. It will certainly be easy to care for them at the barn... everything I need is right there!!! 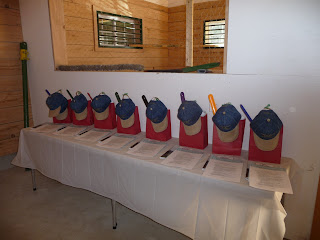 We began to set things up for the clinic... brother Bill arrived with the first run of food stuffs.... I did the stalls while waiting for the port a potty to arrive. Ed ran to get Alice (Deb's mini... Mocha's baby) who will be participating in the clinic). These are the "thank you bags" that all the students will be taking home with them... the hats were Betty's idea (they say Sweetgrass Farm... driving clinic 2009) 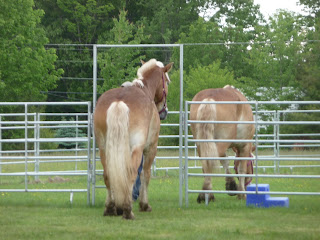 Later in the afternoon, Becky and Butch arrived with Belgians in tow!!! They looked pretty happy when they saw the weekend accommodations!!! Tonka and Duke didn't quite know what to make of our guests!!!! 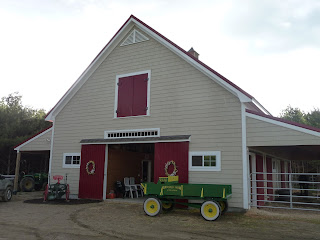