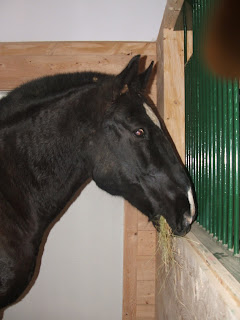 Last weekend we went out to dinner (as we usually do) with the family. Dave mentioned that in the "uncle Henry's" (a small magazine where you can find almost anything to buy).. was an ad that several carriage horses from Acaida National Park were for sale. I have been looking off and on for another draft with the idea that one day, Ed and I would have a team. So, Dave's comment interested me, I went and bought "an uncle Henry's". Sure enough, big ad .. I talked it over with Ed and he said, "give em a call".. but it was another few days before I did.

I called last Tuesday and talked with the owner of the horses, he actually lives down in Kentucky, but the horses were being kept at a dairy farm and the farm owners were acting as his agent. He asked me what I thought I was looking for, and of course I knew right away... another Percheron.. black, about the size of Tonka, but with more experience and I didn't mind if it were a bit older. Well... as a matter of fact, he had just the horse to fit the bill. He gave me the name of the agent and his phone number. I called... and asked about Duke. Justin (the agent) said that there had been a lot of interest in Duke, he has pulled the park carriages for the past 9 years, and has done it all. I told him I would like to come and see him on Saturday (today) and he said fine.. but he wouldn't guarantee that he would still be available. I decided I would just take my chances, if Duke was suppose to come to our farm... then he would. 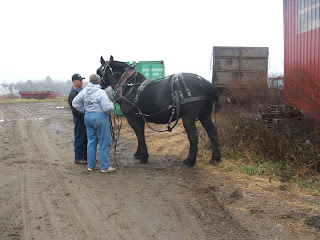 Ed came up with the idea of calling Butch and see if he would be willing to come with us, and give us his opinion. I thought that was a great idea, and gave them a call. I told Becky what I knew and when she asked where he was and who was selling him... it turned out that they know Justin from the "horse pulling world". Butch said he would call and talk to Justin and see what more he could find out about Duke.

You can bet I was pretty excited when Butch called me back and said..."I think you should take it look, he sounds like something you are looking for. Justin is a good guy and he wouldn't tell me different. If we go, bring your trailer and check book". I told Butch that would be awesome, but that Justin had said he wouldn't guarantee Duke being there until Saturday. Butch said ..."I'll take care of that". 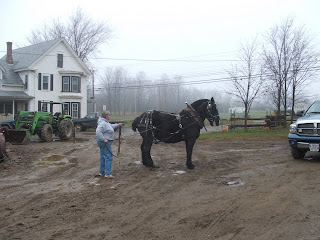 We were up bright and early this morning, did barn chores quickly, hooked up the trailer and met up with Becky and Butch in Augusta. Butch told me.."I asked a favor of Justin... to hold Duke until we had a chance to see him... he said for me, he would" (what a gift!!!!) The minute I saw Duke I knew he was the one. We had a long talk with Justin and the bottom line was... the owner did not "win" next year's bid on the carriage rides, and had to pull his fleet of horses from the park. Instead of shipping them to Kentucky, he decided just to sell out... 11 horses, basically 5 teams and a spare. Only three horses were left this morning... Duke and a team of Belgians. Butch threw a harness on Duke, did some ground driving around the yard, and then handed him over to me. We did well, together, but I have to be honest, it was a wet, drizzly day... the yard was mud.. and I was more worried about my footing than being able to drive. Still, we played for a bit and then I had a quiet minute to ask Butch what he thought. "I'd take him" was the answer.....

Well, dear readers, I am sure that you have already got it figured out.... Duke is "home" in our barn this evening. I have to say I felt bad as we pulled out of the farm, his buddy was calling and calling to him as we loaded him up, and Duke gave a loud call back as we pulled out onto the road. But, he will have an amazing life with us, and once he has settled in, I am sure he will be happy on our farm.

The next few weeks will be getting to know him, fitting him to a harness and helping him settle in with Silver, Tonka and Mocha.... but, it will all be good.... I am sure.