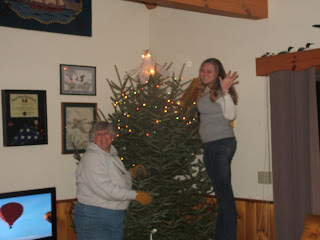 Tonite was the party for my dog club... but due to the weather (sleet and ice) it was decided to postpone it until next week. Sadie is joining the club, so she was disappointed to hear that the party was off for the evening, and decided that she would come and spend the night with us. She drove up mid day, before the roads got too bad and we have been having a nice visit. It was fun to make supper for "a family" again.. I still have trouble cooking for just two!!!

Since Sadie was here, and we weren't going anywhere, I thought it would be a good evening to get the tree up. I dragged it in earlier this afternoon so it could dry off (made a bit of a mess in the bathroom... but that's clean able) and after supper, Ed got it into the stand, and Sadie and I got it decorated. This is the first Christmas tree that has ever been in the camp!!! And most likely the only one, since next year we will be in the house, so this is a special tree. 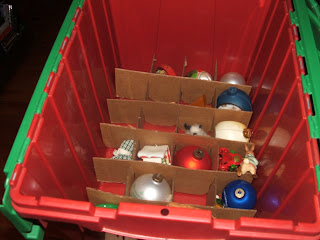 When we moved, we wisely put the Christmas boxes in the trailer where we could find them. I have to say, opening these boxes is like being in touch with old friends. Last year, when I was packing them away... knowing that we would be in a different house this year.... I bought these boxes for the ornaments, and went thru them, sorting them out and checking them over. It was nice to have them in such good order this year. Some of these ornaments I have had for over 30 years!!! I have always loved Christmas and began collecting ornaments when I was 14... knowing that one day "they would go on my tree". When the girls were little, they knew that there were certain ornaments that they were not allowed to handle, and though I felt sort of mean at the time, I am glad that I kept that rule, because I have these ornaments today. I have a lot of ornaments, and not every one is able to get on the tree, but this year, all but a few made it. 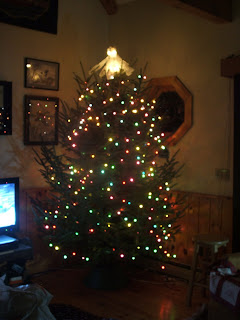 We had to do a bit of re-arranging to find the perfect spot for it, but that's ok. With dogs, cats, and not a ton of space, we had to be careful as to where it was. This corner seems to work.

"And so this is Christmas"... as the song goes... "another year done".... it will be different for me this year, but I am so happy that "everyone is around" and I know that it will bring it's own special memories.

in time for Santa???

Today's and tonite's weather isn't great.. to say the very least, we are having the "betweens" of freezing rain and sleet. I was a little surprised to find everyone working on the farm this morning as the roads were already getting a little "bad"... but the masons were there for the chimney, Ken and crew for the house, and Chris to finish up a little bit of work in the barn. Actually, I had an appointment with my truck bright and early, so it was mid morning before I made it down to see what was happening.

The chimney is coming along well, these guys don't 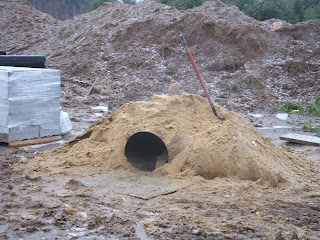 fool around and know what they are doing. One thing that intrigues me is this "sand warmer" that they have. It's important that they keep their materials warm, including the sand for the cement, so they have a barrel that they keep a small fire burning in, pile the sand on the top, and it stayed warm and dry all day long. (you don't want to stick your hand in that sand... it's hot!!!!) It was such a wet, raw day, that Ed said he spent a few moments near the fire to warm up.

So, here's the chimney coming up from the basement. The big block will be used where the chimney won't be "seen", but now that they have hit the 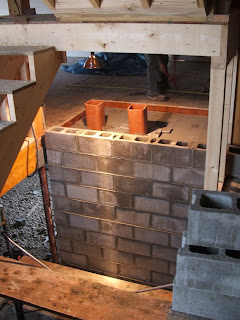 first floor, it will switch to brick. It's a big chimney!!! just the way I wanted it!!! Besides, this will be one chimney that Santa won't get squished in when he arrives... though this year, it will be OK if he just flies by!!!!

This is the hearth that will be in the living room/kitchen area. I forgot to report, but we bought our woodstove last Saturday. We needed to decide what kind of woodstove so the mason could plan on the flue size and where the thimble would have to be placed. So, Ed and I went looking at stove's... we found just the one we wanted, and since it takes a month for them to come in, we just decided to buy/order it. I wished I had taken a picture of the floor model to show, but you'll have to wait until we get the real thing. I 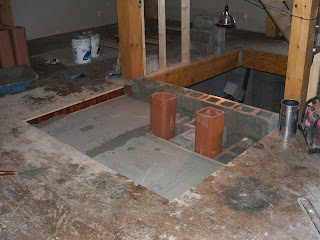 t's pretty little stove and I think it will look just right.

The pad for the outside wood furnace was pretty much cured, so Ed was able to get it into place. It's nice to have it where it needs to be, we know it's "safe" and out of the way, and now when the winter weather hits, we won't have to "worry" about it.
Would be nice to see some smoke coming out of that little chimney, but there is still some "hooking up" things that need to be done before that can happen. And, we do have heat in the tack room in the barn (when the generator is running..... no CMP yet!!!) so the guys do have a warm place to eat lunch and just regroup. 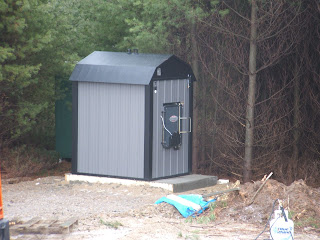 I worry about them on these raw winter days... I know they are used to this, but I still like it when they can get warmed up before heading back out to work.

My last complaint .... still waiting for the electric company to come and do the final hook up... truly a 10 minute project.. but alas... no one yet. And with this weather and the fact that there will be power outages with this ice hanging on the lines, it will be another weekend that we run on generator!!! I keep promising the horses that their electric buckets will work one day soon.... but I think they are beginning to doubt me!!!