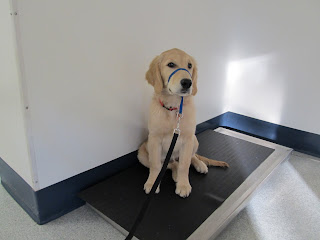 After saying good bye to Cole on Monday, it was nice to return to the vet's again with some thing "fun". Ginger needed the last of her shots, so we popped in to get that done. She hopped right up on the scales, and waited quietly while they got her weight. She is up to 32 lbs.. so she is officially bigger than any of the cockers. I think she looks so "grown up" in this picture!!! Her "puppy look" is fading fast. 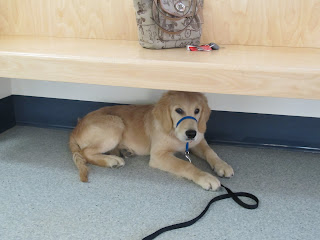 They have these great benches at the vets, so we practiced a bit of "under"... it took a few tries for her to get the idea, but once she understood, she was perfect. 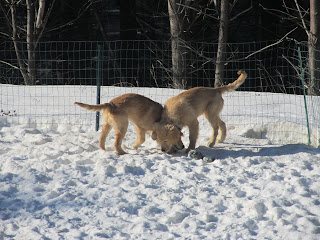 Brother Leo has been staying with us this week. The puppies have had the grandest time together... they love to be out in the snow and I have to bring them in. They don't know when they are tired!!! Kathleen was little worried that two puppies might be a "bit much" , but with the fenced in area, they have pretty much entertained themselves ... Ginger's going to miss her playmate when he heads home in a few days. 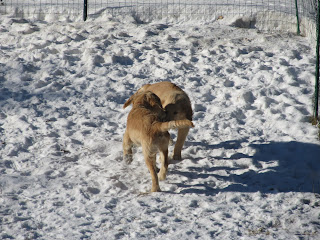 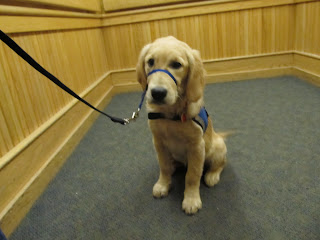 Our week hasn't been without training, though. On Sunday (last) Ginger went to church with us. She tucked herself under the pew and never made a sound. I did have to run her out during the last song for a little "break".. but for her first time, she was wonderful. So.. guess it will be "church" each week for her... Chester used to love going to church. 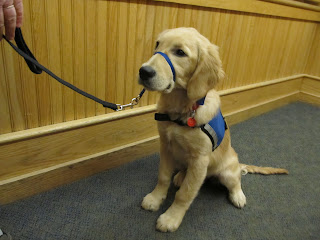 We also got to do a little work in an elevator. I had a private student to work with in the old home town, so when we were finished, I ran Ginger over the hospital. We were greeted at the door by the volunteers, who asked how they could help. I said "all I need is your elevator.". We took several trips up and down, worked on "sitting quietly" while it moved and not going out the door until told to do so. Ginger loves to work and learn new things... I have a very good feeling about this "service dog to be"....
The rest of the week was "quiet" especially compared to past couple of weeks. Though, not so for my dear Ed.... last Monday night a firefighter from a neighboring town was killed on his way to a fire call. He actually lived in our town, but was a member of the fire department in the next town over. It was (has) been a great loss for the fire department. Since they (the other department) was so wrapped up in the funeral and the loss... Ed was asked to plan all the "coverage" for their station and the surrounding ones. He spent hours on the phone, "re-arranging" local towns and their trucks, so there would be coverage while other arrangements were being planned. I have prayed all week for this fire fighter's family... I can't even begin to imagine what they are dealing with. Please think of your local fire fighters whether they be paid or volunteer and remember the ones who have given their lives in the line of duty.