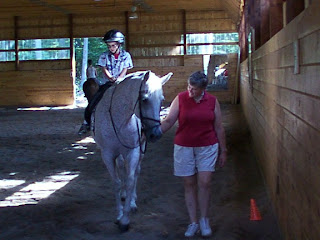 These "old" pictures of Silver were posted by my friend Traci on her blog and I just loved them so much, that I wanted to share them with all of you...

The "little guy" on his back is Traci's son Dillon. (who now is well into his teens!!!!! and no longer a little guy!!!).. it was the first time that he had ever been on a horse and I remember he wasn't one bit afraid. We had only had Silver for a few months, but being the sweet fellow that he is, anyone could (and did) ride him. He always took such care of who ever was on his back... including me!!!

As most of you know, Silver was my "first horse".. I had ridden a number of years and ever since I was a little girl always wanted that horse of my own.... took me a "few" years to do that, actually it was Ed who sort of prompted me to do it!!! (nothing like a supportive husband!!!) 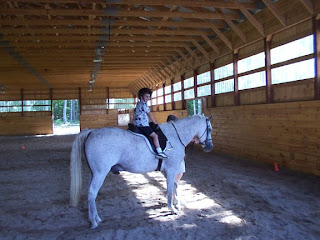 Silver was about 18 when I bought him. My trainer found him at a schooling stable, where, he had had enough of being a "schooling" horse and it was time for him to find someone to love. I knew that my riding talents would one day "out do his", but I always told him that I would be his last home. And I intend to keep that promise!!!! Though seeing these pictures of him with Dillon, and watching him this past summer give rides to Rachael..... I have thought that he would have made an excellent therapy horse!!!!!

He is "officially" retired now, he is pretty "creeky" and I worry about him tripping or whatever. He can certainly keep Tonka in his place and I am just so excited to get him up on the farm with those big pastures for him to roam in.

So, Silver, old boy.. you are the topic of two blogs this day!!!