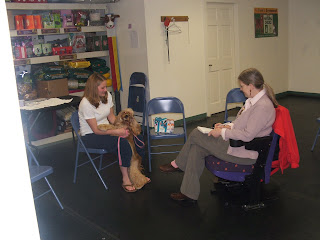 This past Saturday, at Reigning Cats and Dogs in Wells (where I teach my Wednesday night classes), Paula brought in an Animal Communicator, Louise. I really don't know what I make of all this, but thought, why not go and see what it was all about and have a first hand experience with it. A number of my students recently have "met with communicators" and if nothing else, I can at least say I have tried it myself.

Course, I wasn't about to do this alone, so I invited Kas with Charlie, Sadie with Tatter, Deb with Hallie and Lucky, and I took Moxie and Camille.... and a picture of Tonka!!! Sadie went first with Tatter... I can't say that we learn anything "amazing".. Louise said that Tatter was very happy living with us, that she wouldn't mind being a show dog, but would have to be eased into it because she didn't like a lot of noise and confusion and was a bit of a "jumpy" dog, and that Tatter "liked Tazzy ok... but will like her better once she (Tatter) becomes top dog".... ( I must admit that part was a little surprising as we didn't bring Tazzy with us, and I can see here at home where those two girls do have issues every now and again!!!) 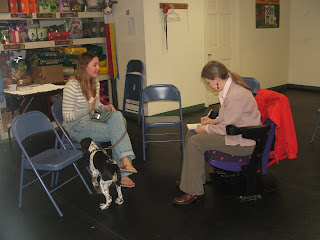 Kassy went next with Charlie... this "conversation" went even more....ummmm... interesting (guess that's the word). Charlie "said" that when he picked Kassy out, he knew that she needed him. He said that he could tell she needed someone special, even if he didn't know why at the moment. Now, he "says" that with his Daddy away so much, he is there to fill in and take care of things. He "says" too, that he always snuggles in bed to keep Kas company and that Nora (Kassy's cat) is competition in the bed, so that is why Charlie chases her out. Kassy did ask why Charlie does this little hopping, sniffing, scratching behavior... and Charlie "said" to keep mice away, because Kas is afraid of them. (we do have mice now and again in the house!!) There were a few other details that I can't exactly remember, but Louise will send us transcripts and we can look them over.... either way, it was rather strange......

Deb went next with her two dogs... again, I can't remember all the details of their conversation, but am anxious to see the transcripts and review them. However, like with Sadie and Kas, a few things were said that are hard to explain. It was then my turn, I took Camille in first , like Tatter, nothing amazing was said. Camille is very happy in her home, she "says" she likes everyone (which is true, Camille always gets along with any dog). She "said" she was the second dog - that Moxie was first - and she likes going to dog school, but isn't as stern as Moxie is with the other dogs (that was strange, because Camille would like to correct the others sometimes, but doesn't do it in a strong manner), 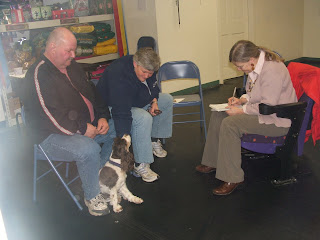 Then I went in with Moxie (so did Ed as you can see with the picture!!!) Again, this was most interesting..... Moxie "said" she was number one in the dog pack and with me!!!! She loves to travel (which is the truth... Moxie loves to stay in hotels and be on the road!!!! always has!!!) She has to be with me all the time, and likes to do the dog shows. She also "said" that she liked dog classes ok, but found the people not very smart and that is the reason why their puppies are so bad. She "thinks" that the people should listen to me like the puppies listen to her. She "says" that she would like to be able to correct those puppies in class much sooner, but understands that I won't allow it, because it will upset their owners!!!! So she leaves it to me and wonders why the people don't always get it. She also "said" she has a tooth that is a little trouble some. (lower right side-- so, I will have that checked out when we do our spring appointments.... just to see. ) She "said" too that she keeps the other dogs of the house in line, and that they don't upset her too often because she can make it "not happy for them if they do". Then she "said" she didn't know why she had to be there, because "her Mom already knows all about her!!!!"

I also took picture of Tonka... because she can do it that way as well. With Tonka there were some interesting things... he said he was in training and didn't know exactly what it was all about, but was willing to give it a good try, and that his "mom" knows more than she gives herself credit for. He "said" the trailer was dark and he had been frightened on a trailer one time and so that is why he is a little afraid of it, and if the lighting in the trailer were better, that would help. He also "thinks" that his life now is much better than it used to be. that he wasn't at all happy in his old home. He "said" too, that he likes his stable mate (Silver)... and that he was a "grey horse" with alot of experience. (now that really surprised me, because I never said anything about another horse, and especially the color)

So, what do I think.... well, I don't know exactly,--- except that there are greater things in the world than I know. And I have to admit that I often marvel at the "miracles" that happen everyday. And when God created the heavens and the earth, His game plan is far more reaching than my human mind will ever be able to comprehend. Is it "real"--- this communication thing..... well, I think I will just keep an open mind
Posted by sue at 7:06 AM 1 comment: