For many years my parents took the girls to see the Nutcracker every Christmas season., and no matter how many times they went to see it, they always loved going. It's now a fond childhood memory that they often talk about. When they do, there is usually another comment that goes along with it..... Ed has never seen the Nutcracker and has stated that a few times. So, a couple of weeks ago, I went over to the Portsmouth Music Hall and purchased two tickets for us. I had the whole evening planned.... a nice dinner at the Muddy River Smokehouse.. then a quick walk along the cute little streets of Portsmouth to the Music Hall, and a coffee and dessert to follow the ballet... perfect......

Until...... a panic call from Teresa around 3:00 this afternoon... see this picture of Silver, well... this is the "before" and I will get an "after" the next time I go to the barn.
Silver was "horsing around" as near as we can figure, and bashed his head against something... most likely a fence post. And what Teresa found was our nice white horse with blood running down his face!!!!( If you look carefully, you can see he already has a scar... he came with this and I can only imagine what he did.... )
Needless to say, I go racing up to the barn, Teresa had him in and on the cross ties when I arrived, and was working on stopping the b 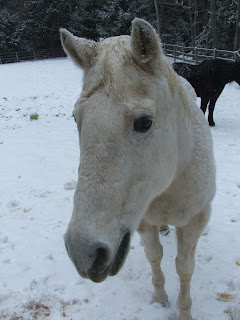 leeding. Upon a careful look after some of the bleeding stopped, it was decided that we needed Dr. Mike to come and put some stitches in...... so much for the evening!!!!
Ed was on his way home from Acton and called to check in, I told him to meet me at the barn and gave him the story about Silver. He arrived about the same time that Dr. Mike did.. which was good, because we needed the extra hands!!! Silver ended up with a couple of staples and some stitches where the wound is pretty big. He will probably have a headache for a little bit, and will need some meds for the next week (great....he is awful when it comes to meds!!!!)
By the time Mike was done, and the tranquilizers were wearing off, it was too late for Ed and I to make dinner. Since this was all a surprise ... I told him we were going out, but didn't give him any details.... Ed didn't really know what he was missing out on. I quickly ordered some sandwiches from the pizza house, which we wolfed down, and we did make it over to Portsmouth just in time.
The ballet was fine, but (sadly) it wasn't the "traditional" Nutcracker. I was a little bummed, but Ed liked the dancing and the music. We did find a coffee and dessert afterwards, but the cafe was so crowded that we had to stand (Portsmouth was hopping tonite!!!) it was good, but not relaxing. And after that, we just headed home... where I am now blogging!!!!
All in all it wasn't a "bad day" for sure (well, other than our poor horse!!!.. oh and the vet bill that went with it!!!!) but, it certainly wasn't the day I had planned... which just goes to show.... things can, will and do change on a moment's notice... so, I guess you just make the best of it.....especially when you have pets!!!!!
Posted by sue at 7:35 PM 2 comments:

up on the farm

It's cold and windy... another storm has it's sights on New England... Ed is on his way to the farm, to get the last of the downstair walls in place. I would like to be there today, but in my usual style, I feel like I have a million 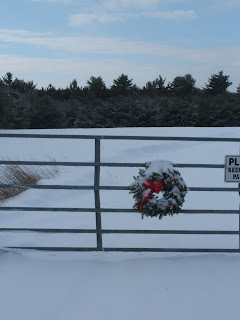 things to do on my list!!!
Today will be "dog grooming day"... I am usually very careful about this and keep it up to date, it's easy for it to get ahead of me....( with seven to do)... and better to keep it on a routine, but with the trip to NC last month and the "hussle" of the holiday season.. I am behind and the dogs are really showing it. There are two times when I wonder why in the world do I NEED seven dogs... (#1.. trips to the vet and #2 grooming day.) I actually got Cole and Moxie done yesterday.. today it's Camille, Hunter and Trevor... I will have Sadie do Tatter and then the two of us with tackle Tazzy... she can be a bit of horror to do!!!! In my new house, I have a grooming room all planned out, with a high standing tub, good lighting and easy clean up, but for now, it will be done as it always is.

Despite the weather, Ed and Chris have done excellent work with our barn!!!! This is a really big project, and having to remove 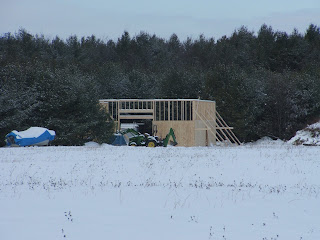 snow and cover everything when you are done, takes valuable time out of their day. I only hope Ed really knows how much I appreciate all of this, and I know a day will come, when we will look at all this, and think... it's 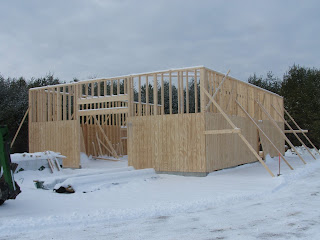 good!!!
"We" have had a few visits from the neighbors, so far everyone thinks the building is beautiful, and not that it's our main goal, but it does fit the landscape and adds to the neighborhood. We want it to have a "real Maine farm look" and I think our goal is in hand. 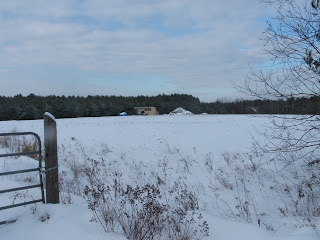 The house on the other hand, is proving to be a challenge. We met with the builder the other night, and after picking myself off the floor when he presented his price.... we have some major re- thinking to do, including some huge down sizing.
But like Ed says, "it's cheap on paper and that's where you need to begin". We also are going to branch out a little and take a look at some other timber frame companies. There are a number of good companies out there, and now that we have plans in hand... we can go to them and see what they can come up with for numbers. We knew that building a timber would run more and we hate to let that dream go, just yet. So, it's back on the drawing board, and do a little more work. I guess that's the thing about "dreams".... you have to be willing to work, be patient and look at them in a real light, I can do that.