a week of stories...

so.... after the beautiful weekend weather (and the new stairs in the house) the air took a major change. The weather came in very hot and very humid, with thunderstorms happening almost every afternoon. Some of these storms were quite severe... but for sure, the storm we got on Wednesday evening was the worse. 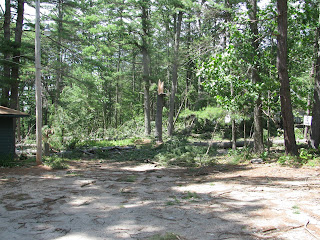 In our little town, we fared quite well, all things considered. The lightening was very fierce (driving home from dog class was more than "interesting") the wind absolutely roared. Trees and power lines were down all over the place, and I had to be extremely careful driving. Poor Camille wanted so badly to be in my lap, but had to settled in on the seat beside me. 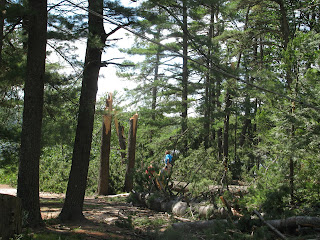 Several neighboring towns had actual tornadoes... confirmed by the weather people. They spent the better part of the week, cleaning up and restoring power. We had a few snapped trees ourselves, with the slight possibly that the tornadoes were forming in our little town. There was some clean up, but as I said..overall we fared quite well.


Thursday morning found us at the hospital. My dear Ed has yet another case of kidney stones!!!! We had one run to the ER a few weeks ago, and he was due to have them "blasted". If you remember (dear reader).. we went thru this last summer. We would like to know what this yearly event is all about, but there doesn't seem to be any real answers to the question. As it turned out, the stone were not able to be "blasted".... and he has to return to the hospital in August to have it done. We're not sure why the procedure wasn't done, Ed still needs to talk to the doctor about that... 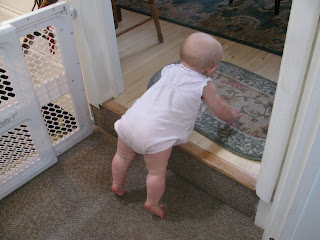 So, while I was waiting for Ed.. Abbie and I went to visit with my parents. It was nice to have someone to spend the time with and chat, it kept me from worrying too much. Course Abbie was good entertainment too....

she's really got this crawling thing under control... and thought that maybe tackling the step in my parent's house might be fun.... 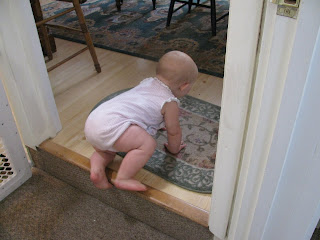 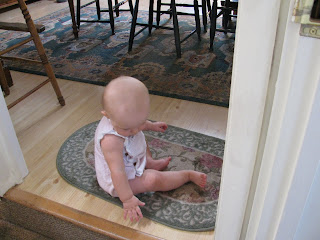 and step three... look back and see what you just did~~~ pretty exciting!!!!! 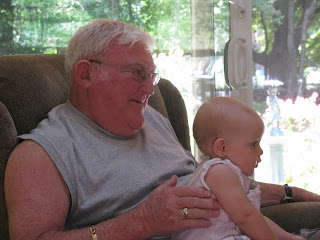 And spending time with your great grandfather is pretty nice when you are beginning to get sleepy. 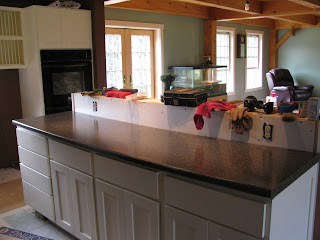 Friday turned out to be quite the busy day.. and perhaps too busy for my Ed. He ran and got our counter tops, and did a "trail placement" of them. I am so happy with the color we chose.. and this is where the cook top will go. 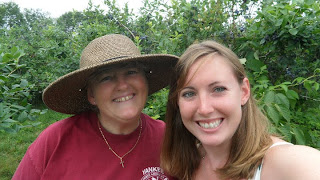 Kas and I went on another adventure.... it's blueberry season here in Maine, and like the strawberries of the spring... the blueberries are in fine shape!!!! Here we do a nice little photo before getting to 'work" 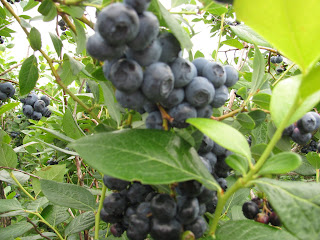 These are "high bush" berries.... which makes the picking quite easy. (the low bush are hard on the back and are usually done with a rake)... high bush are perfect for hand picking.. though these berries look more like grapes than blueberries... 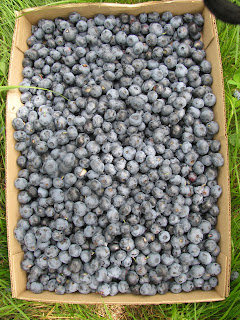 It took almost no time at all to fill our boxes. I never did get back to the strawberry picking, but I AM going to get more blueberries... I love blueberries, and they freeze so nicely. Pies, muffins and pancakes all winter long if I get my act together.... 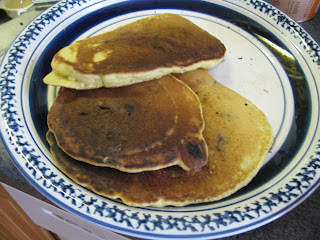 Ed made a beautiful batch of blueberry pancakes for breakfast Sunday morning. We topped them with home made maple syrup from our friend's farm.... those with coffee, and sitting lakeside... now tell me, what could be better. Yup, it will be more berry picking for me!!!!!! 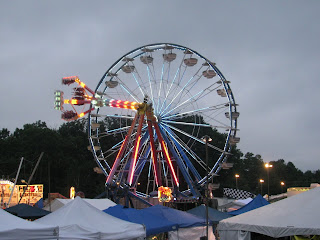 Back to Friday... in the evening we went to the first of the local fairs. This is where Ed was probably getting into the "way too much after a day in surgery" thing. But he didn't want to miss this nice little fair. 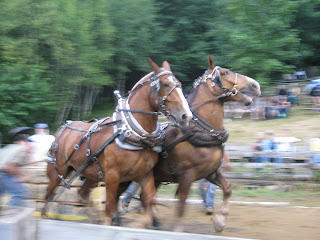 We did all the usual fair things... food, met up with old friends... animals... and a favorite, the horse pulls!!! Talk about a feeling of power... get behind a pair of these beauties!!! They are more than ready to haul, and one thing for sure, you want to be certain you get that hitch on the first try. (some didn't though!!!) 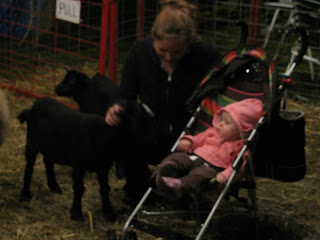 Abbie loved the fair... all the lights and sounds.. and of course the animals!!! she so loves animals and nothing frightens her when it comes to them. Sadie brought her into the petting zoo, and all the little goats climbing around on her just made her all the happier!!! Our kind of kid!!!! 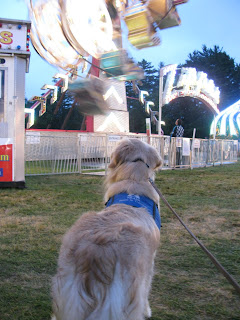 I brought Chester along with us. Sadly, dogs are not allowed at the fairs anymore. Guess there were just too many problems with dogs not being well attended to. But with Chester being a service puppy, there wasn't any trouble. I knew it would be a great training experience for him, and it certainly was. The only "trouble" was, people were very interested in him and wanted to talk. Which is fine with me, but hard for the family when they have to stand around and wait for you to finish talking. I had to finally tell everyone just to go and and I would catch up with them when I could.
Chester was excellent (as I knew he would be).. but there was one ride that really caught his attention. I don't know if it had a "sound" or what it was, but he stood and watched it for the longest time. 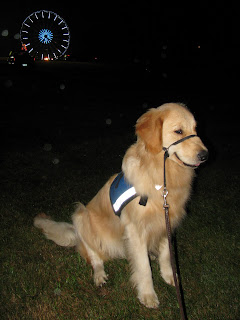 By the end of the evening, he was pretty tired and ready to head home... so was Ed!!!! It was a fun night, but tiring for the two of them.

Saturday morning, Ed was feeling kind of "punky", He wanted to get some things done in the house, but had to give up and just take the afternoon to rest. We really do need to figure out about these stones... any suggestions out there in blogger land???? 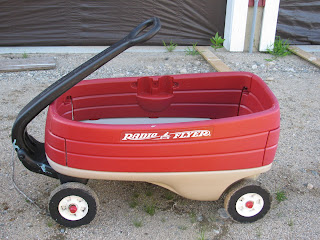 We had to make the dump run. The rental camps needed the trash to be gone, and we needed trash to be gone.. so we did do that. While we were waiting in line to unload, we noticed the car ahead of us had this cute little wagon. I jumped out and asked them what they were going to do with it. They had planned on leaving it at the "trade house" (a little shed at the dump where people can leave items that have good use left in them... and you are allowed to pick thru and take what you need or want)... I said it didn't have to go to the trade house... it could go right in the back of our truck..This is a perfect little treasure for Abbie and will be so much fun around the farm.. amoung other places!!!
By Sunday, Ed was feeling a little better, but we both know he needs to take it at an easier pace until these stones can be blasted... so... the work comes to a slower speed at the house.. but we'll get in when we get in.. and for now.. that's all we can do!!!!