new residents on the farm!!!! 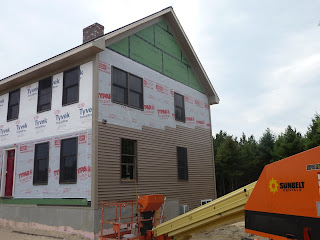 One year ago, this very night, Ed and I spent our first night as "new residents of the town". Kas and Nate were safely back in Maine after Nate's four years of service in the Marine Corps... and even though none of us were really settled into our new homes, it felt like everyone was where they were suppose to be. I still can't believe that the year has come and gone!!! I truly hope the rest of my life isn't going to continue to go this fast!!!

Ed and Ken made great progress on the siding today.. actually they made it even higher than this pic, but it was too dark to take a picture tonite and show their total accomplishments. Once you get thru all that fussy work around the windows, corners of the building and such.. the work goes pretty fast. I am happy to report that I am liking the house color as much as the barn, and am relieved about that!!! It's a nice soft color that I think will compliment the house. 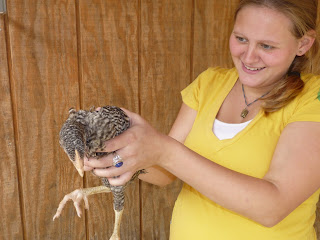 So in yesterday's blog, I "talked" a bit about possibly getting some more chickens for the farm. I can't believe that I am turning into a "bird person".. because I have never really liked them. But, we have grown pretty fond of "Mr. G".. and then the two hens that were given to us. I have to admit, that getting a fresh egg almost every day has been pretty cool, and I am really liking the "fresh egg vs. store egg" taste.

Sadie has really gotten fond of "her chickens", and has been saying that maybe two more would be nice as we would get a few eggs a day. Just enough for the family, we're not interested in selling eggs, but it would be fun to give some away and have them for ourselves. So, we began to look at the different kinds of chickens, what their temperaments were like, would they be good "free rangers", egg quality and the like. We sort of picked out the Rhode Island Reds, until yesterday, when at the grain store... we came across a "breed" known as the Barre 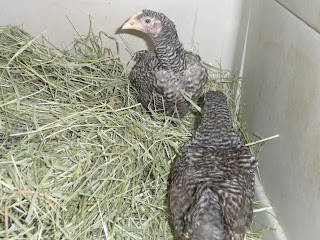 I think it was the black and white coloring that really attracted both Sadie and I. They look like a "rare breed" that we see in Colonial Williamsburg, and they suppose to be very docile and easy to get along with. They lay a fairly large brown egg, and are "home bodies".. so, we decided that two of them might be a nice addition to our "little flock".

I was hoping that I might add a couple of guinea keets as well. They had 8 keets last week, but when I got back this week... all the keets had been sold, and none expected in until next spring. Oh well, guess I wasn't suppose to have them, and really, if the three Keets we have do well, plus Mr. G... four guinea hens are really enough. 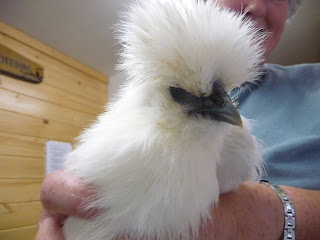 However something else really caught my eye!!!

Is this the strangest bird that you have even seen?? It is a chicken.. of sorts... they lay eggs, but I guess they are so little that it takes a few to make up to a real chicken egg. They don't have real feathers, but more of this "down like" feathering. They can't fly, and basically, aren't much good for anything other than eating bugs and looking cute. 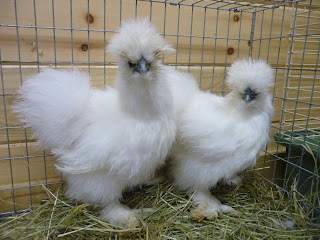 I just HAD to have a couple of them!!!! So, along with our four guinea hens, and four "real" chickens, we now have two silkies!!! just because ....

These are very docile and can easily be handled. They don't make much noise, and they feel like down pillows... When they get bigger, I will let them free range with everyone else, but right now we are just working on meshing "everyone" together. 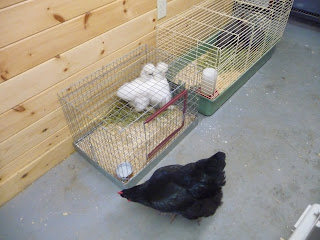 The Keets will go into the stall when the turkeys are moved and the Silkies will go with them. So for now, I have the two caged side by side and they can get used to each other. The "Rocks" are being caged inside the chicken pen, so the big chickens can get used to seeing them and then in time, they will all go out together.

Miss "big" chicken did come into the tack room to check out the "newbies"..but she actually seemed more interested in their grain. And Mr. G. has checked out the keets and seems pretty interested in them, and I think in time, everyone will get along just fine as long as they have the room to roam and time to get used to being around each other. And so, for now, that's about it for animals on the farm... we are currently housing... four horses, four guinea hens, six chickens, three guinea pigs, one bunny, one barn cat.. and 12 turkeys...