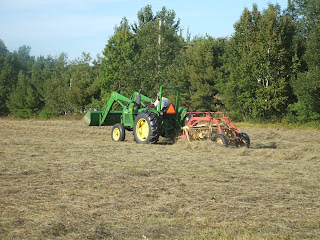 It amazes me at how fast time can fly. Nearly a week ago, Ed and Dave were heading to North Carolina for Nate and Kas.... now they are "home" and the "transition" has begun.

"We" have been fortunate to get a second cut of hay here in the southern part of the state. It has been such a wet summer, that many "haymen" were not able to get a first cut. But, the weather seems to have turned for the better and those who were able to cut in June, are cutting again. Our own personal field was cut just this past week... it's one and only cut, but it looked good. Since the hay isn't the highest of quality, we just have Joe take whatever he can get off th 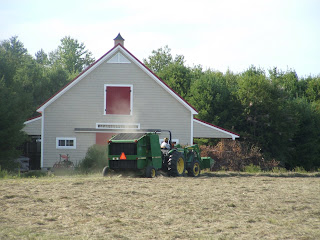 e field. He uses it to feed his cattle, and if he is happy to do the work, we are happy to just have him take the hay. He puts it into round bales, and the field looks so much better having been cut. We don't know exactly how much of it we will use for pasture when the horses live here, but for now, we are happy to have it knocked down.

Ed, Dave, Kas and Nate arrived home very early Friday morning (around 1:30 am) they would have made better time, but got hung up in Conn. due to road paving. They spent almost three hours in traffic. I tried to wait up for them, but since I had to meet Dean and have the horses feet trimmed, I just couldn't wait up any later. I bearly heard them come in. 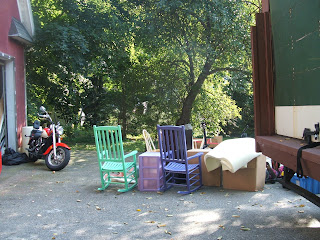 I snuck out fairly early, and left everyone still sleeping, by the time I got back, Kas and Nate were up and eager to start the day. We still had some packing of things, but they wanted to get a few of their own things in the house. It seemed odd that as soon as Ed and I had something out... Kas and Nate had something in. It was a full day's work, but the end of the evening... they were pretty well in and we were pretty well out. I am excited to see what changes they will make with the house. And so, Ed and I headed north to home..... Acton!!! 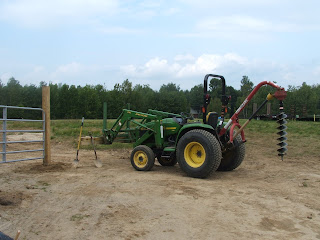 Today, we worked on fencing!!! Once we get an area fenced in, we can move the horses up!!! Because it has been so long since they have had "pasture" I am choosing to keep them in a smaller space. In time, we will have a larger area for them, but for now, it is safer to keep them on a small amount of grass.

It is a real blessing to have that post hole digger for the tractor!!! 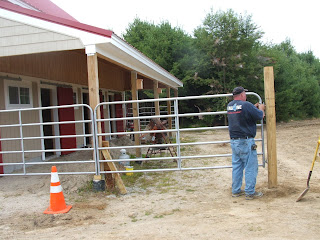 We have a double gate in the front ... this will be a big help when we have snow to move next winter!!!The rest will be done in electric fence, which our horses respect and will be fairly easy to move whenever we chose to do that.

With luck we will bring the horses up sometime within the next couple of days. This will be a very exciting day.... for all the work that Ed has put into the barn will finally be coming true. We still have to get stalls ready, and do some picking up, finish the fence of course, so we don't know exactly when this will all be done... but it will be soon..... stay posted....