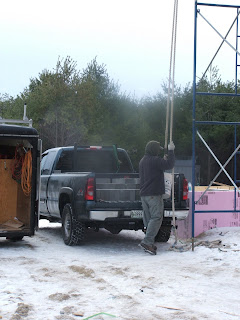 With predictions of another winter storm on its way... everyone was all about getting "things" in place today. The masons have the chimney threw the second floor and are heading into the attic space. So today, they were hauling bricks up to the attic and getting ready to go threw the roof. This was slow work, but their "pulley" idea worked out well, certainly far better than carrying them the whole way up.

I am anxiously awaiting the chimney thru the roof!!! I have "stressed" over and over (and over again) that I want a nice big chimney coming out of the roof. Everyone has assured me that it will be just what I want (this sounds so vain...doesn't it).. but for me the look of an "old" house is a nice big chimney!!!! So, I have placed my "trust" in them and hope they come thru for me!!!! 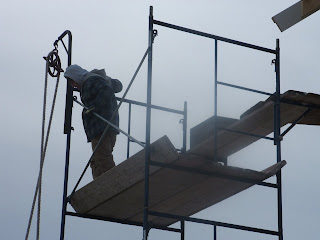 I love the look of the chimney in the living area and think that next winter it will be in full use!!!

I packed "Christmas" away today. For me, this is very late in the season to do it, usually I have the tree down even before New Year's, but this tree has lasted so well, that I didn't feel that rush to have it leave. Last year when I was putting things away, I had taken the time t 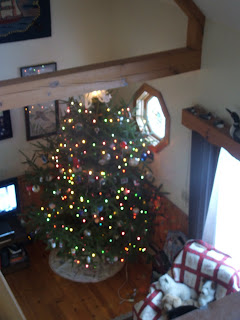 o organized it and weed out, etc... so picking up this year was very easy. There is something to be said about being organized... it takes a little time to do it in the beginning, but I do believe it saves time in the end. 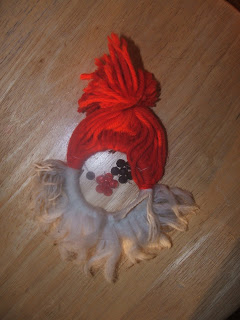 However,there is one ornament that I have been trying to get rid of for years!!! This "Santa"... and yes, it is very beat up and even ugly and I think it needs to leave. But my dear hubby has a completely different view on this matter.... because, this "ugly Santa" has a bit of a history...


See, we were all friends as teens, my Dad called us the "fire crew" (he was the fire chief at the time).. and I spent much of my time "hanging out" with the young firemen!!! The Christmas that I was 16, I made a whole batch of these Santas for the guys to hang in their pick up trucks. It was just a "being funny" sort of thing, but for a number of years, some of the guys had the Santa's hanging in their trucks. Well, time went on, we all "got a bit older"... began to pair off... get married, etc.... including Ed and I.

The first Christmas that we were married, and decorating our first tree... what does Ed pull out.. but "his Santa" that I had made (back then...) five years ago. He insisted that we hang it on our tree... and so we did.... and did and did and did!!! As the years have gone on, and poor Santa has begun to wear out, I have said that he needs to go.. but My Ed...won't "allow" it. Sometimes, I try to hide ol Santa away, but Ed always looks for it and woe to me if he can't find it.... so, Santa had another season on our tree this year... which makes him now 32 years old!!!!! You'd think by now I would just give up and let the old thing go on the tree without any fussing... but, next year... we'll see.....