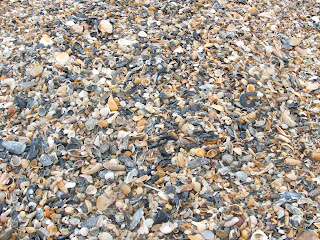 As promised, the shells were nothing less than amazing... it would be easy to spend hours sorting thru them all. We did get some pretty neat ones, but honestly, I was more on a hunt for ponies than I was for shells.

The island is long and low in shape, and the wind whistled across it. When the rain came, it almost pelted you... I have to say, everyone was a very good sport to be out here doing this!!! Poor Mandi, she had worn sandels and one of them broke!!! so, she was walking almost "shoeless"... she is also four months pregenat to boot, and she hiked along like a trooper, looking for shells and keeping watch for ponies.

Now, I figured these ponies were pretty smart, they have lived thru many a rainy day out here, so, we began to check in the brushes for them. Nate and Patrick were happy to scale the top of the sand dunes to see if they could find them, but I sort of felt that they (being much smarter than us) were pretty much under cover and out of the rain!!! We searched and searched, found many fairly fresh hoofprints, and lots of really fresh horse poop.... but NO ponies. Finally, it was getting close to the time to meet the boat, and we (ME) felt pretty discouraged not having seen any. 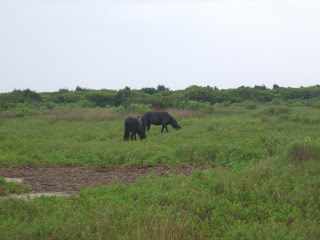 As we met up with the boat, our captain said.. "well how many ponies did you find?"... we answered.. "none"... "really?, he replied.."well there are two just down the beach, I will drive you out past them".

Nate spoke up, and asked if he could run down the beach and snap a couple of pictures for us... I wanted to go too, but he would only allow Nate to go.

So, as we boated along the shore, Nate ran down the beach on foot and was able to snap these wonderful photos of these two island ponies!!! Being brought up on a farm and used to "large animals"... Nate wasn't one bit afraid to walk up fairly close to them. 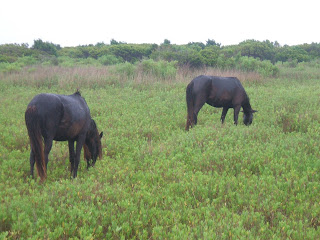 This made our captain a little bit nervous.. he told us that if these two were mares, than the stallion wasn't far away, and might even show up and chase Nate off. No more were those words out of his mouth, when one of these ponies actually charged at Nate!!! But, Nate is quick and understands horses, so he ran just "out of zone" and the ponies went back to their grazing. 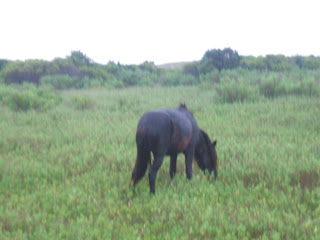 We could see them quite well from the boat, but I would have loved to be up on the shore with Nate... either way, we can say that we got to see them, and I am grateful that Nate was able to get such good pictures of them. I would have loved for it to be a sunny day, and I would have loved to spend a lot more time out there, but we did what we could and the day will always be a special memory!!! who knows, another time may come and we can do this again. But, if anyone gets the chance to visit Beaufort... this is an adventure you won't want to miss.... 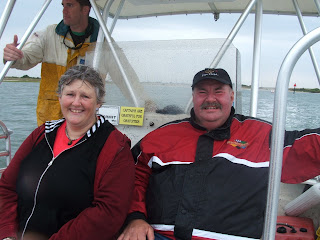 believe me though... that hot shower I took back at the hotel felt pretty great!!! OH... the sun broke out just about supper time......... 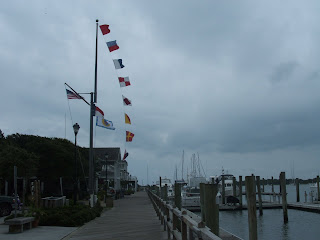 Today was the day of "wild ponies!!" Though when we got up in the morning... "wild" was a better description for the weather. Since we arrived here on Thursday evening, the weather has been nothing short of wonderful... but this morning it looked to be somewhat different. Now, most of you know that weather isn't about to stop me.. (remember a dog show a few weeks ago) and since they were running the boat out to the pony island... Kas, Nate, Mandi, Patrick, Ed and I decided we would go and see what we could find on the Island. 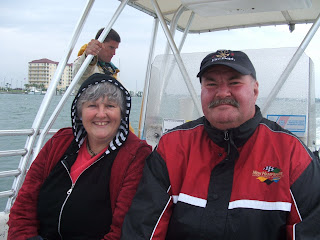 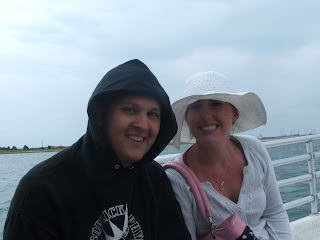 For the most part, we were prepared for the weather.... however, the real rain began to show up as we were already on the boat and heading for the island. It was "cold" too..that wet /damp rain cold that after a little while you decide to "give up and go with it".... 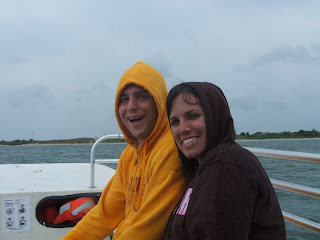 Our boat captain seemed pretty certain that we would see some horses... after all the island is quite tiny (you can pretty much walk the whole thing in a couple of hours) and there are around 120 horses living there, including 8 new foals this season... I was excited!!!


Now "officially" this island is called Shackleford Banks... and back in the 1700's or so, a Spanish ship wrecked off the coast. The horses aboard the ship swam to shore and have survived generation after generation all these years. Today the town of Beaufort, does monitor the ponies, thinning the herd threw auctions when needed, and administering meds and such, also when needed. But for the most part, this is a wild herd, and though you are allowed to be among them, you are not suppose to approach too closely, and you run this at your own risk. The stallions will protect the mares, and the mares 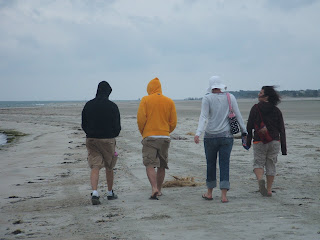 will protect the foals.

Besides the ponies, it is an awesome place to look for shells... of all kinds. We were told to walk over to the "ocean side" of the island for the best "shelling"... so, with all this advise in mind, we were dropped off on the island.. for a two hour visit.

The wind really began to pick up, and the rain was still coming down... but, we weren't going to let that bother us!!! and bravely started off to find ponies and shells.....

THEN, we came across some other folks on their way back to the boat... "Have you found any ponies?" they asked us.... No, we have just arrived... Well, they had been there a few hours in the rain and hadn't come across a single pony.....