Things are going well at the farm, though I have to say, I feel like Titus could be doing it quicker. Now, don't misunderstand that, Ed is working as hard as he can, it's just that there is "so much" to be done, and I have to honestly say, it gets discouraging. Not, that I didn't expect that with a building project, your silly if you think that building a new house is "easy". Pretty much what we have expected has happened... it's just that it is a long project. I am beginning to have "fears" of our mid-October move in date, and now I find myself thinking, "if we can be in by Thanksgivings"....

Course the weather hasn't been so helpful, though now we are in a beautiful stretch here. Ed is up and gone early in the am, and hardly stops enough for lunch. His kidney stones are of no help, and Thursday, he goes in for the blasting. We hope this will be the end of the 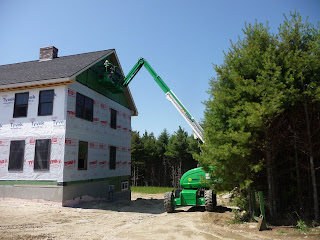 m for awhile. He really tries not to let it effect him, but I am the one that makes him stop and take a break... I can see it in his face when he has had enough. Fortunately, he does listen to me!!!!

Perhaps you have noticed that the lift we now have is a different color. We broke the other one!!! Well, not really, but it did break. Ed and I were doing some painting Sunday afternoon and as we were up in the air (not very high) he said to me, "that lift shouldn't be making that grinding sound"... next thing we saw were little plastic parts and pieces all over the ground. Monday morning the lift rental people sent out a tech who simply said, "I;ll get you a new one"... and the old lift was taken away and this new one arrived in its place. This one is much nicer to work on and I'm glad that it's safe. 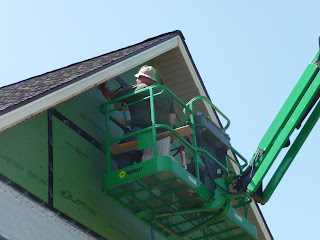 This week's focus has been all the eves of the house and garage. As of today, the guys will have them done... and then, as far as I know, pieces of siding will begin to appear. I have a feeling that it's another one of those projects where all this prep and detailed work has to be done, and then suddenly the "easy, big, fast stuff" happens and you see huge differences. The best thing is, we won't ever have to scale these heights to do any painting!!!!

It's also funny the way they "chase the shade" around the house. In the mornings, the back of the house is nicely shaded, and then it moves to the side and by late in the day, the front is shaded. With the warm summer weather (finally) I think working has been fairly comfortable. As a rule there is usually a nice breeze that blows across the field and we haven't had too many high humidity days... so, that's all been a real plus with this. Certainly much better than trying to do it in February.. which is exactly why Ed and Ken have kept their focus on the outside work for now. They'll be plenty to do inside when the weather gets cooler!!! 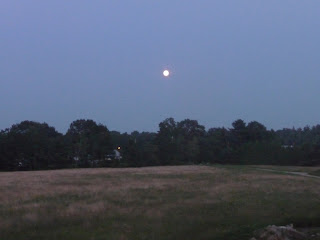 As we were bringing the horses in last night, I got this shot of the full moon from our hay loft. Actually I wished that I could have left the horses out, it was such a nice night. But not living on the farm yet, I don't like the idea of them being out when no one is around. When we are "there", nights like this, I will leave the barn open and let them come and go as they please.

So, "hello August", looking back over the past year we have actually accomplished quite a bit.. since it was just last August when we moved, and the house hadn't even been started yet. Guess, this is a good lesson for me in patience and persistence... I will remember it well.