This is, I dare say, the first of many loads that will be taken 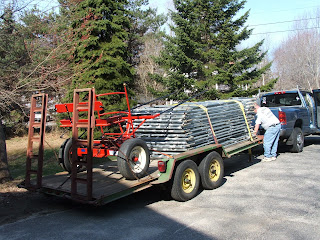 north to the farm... the driving cart will more than likely live there now, as I do not really have a place to "drive" down this way.. and the round pen is actually making it's second trip north.

It's a funny story about the round pen(s), I actually bought two of them three years ago. The lady I got them from, had warned me that these would be the last of her old prices, and so, Ed and I decided to get two of them and then if we found that we didn't need the extra, we could always sell it. We trucked them up to Acton to be "used" at a later time, though we did set one up just to see what it looked like and in case we wanted to use it.

When we moved into Teresa's barn, I brought one pen back down from Acton and used it to outline her little arena area so we would have a place to ride. It worked out quite well. Then when we bought Mocha and moved her over to Teresa's, we took the second pen down and used that for Mocha's little paddock area. So, already we have had good use of both pens.

Now, tomorrow our friends, Becky and Butch are coming to visit. They have been wanting to see the barn, and Butch has been asking about Tonka and his driving work. After some conversations, we decided that Ed and I will bring Tonka up to the barn, and Butch will do a little work with him while they are here..... so, it was time to move the round pen BACK to Acton and get the cart up there as well. 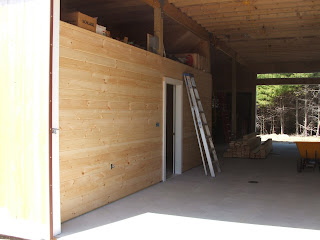 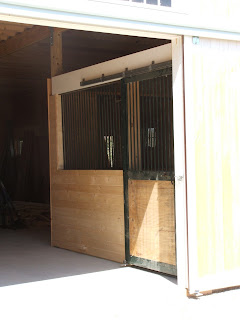 With the "idea" of guests arriving and a horse coming to the farm, Ed and Ken concentrated on ..... finishing a stall!!!!! AND, putting the outside wall on the tack room. So, this morning when we arrived with "our load", I had the most wonderful surprise waiting for me!!! All of a sudden, it is really looking like a horse barn!!! Ed and I puttered around, we hung a bucket in the stall for Tonka tomorrow, put up some cross ties, and just did some tidy work. I have that same "excited feeling" that I get around Christmas time, and can't wait to see Tonka there at his "new home"..... I hope he likes it as much as we do!!!! AND I hope that he plans on "being good" and maybe we can do some driving around the field... time will tell, I guess. 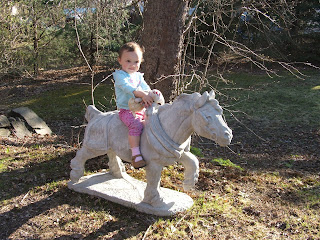 My sister Rachel popped in the other day with my little niece, Naomi.... she is getting so big and I just love having them visit. Naomi is quite fascinated with our house... guinea pigs, bunny, turtle, cats... they have two big dogs, so the cockers aren't that special, but she loves to check out all the other critters.

As they were getting ready to go, Naomi decided she wanted "a little ride on the horse".... so Rachel set her up on the cement horse we got in North Carolina... she thought she was pretty special sitting up there..... I thought she was adorable!!!!
Posted by sue at 1:00 PM 4 comments: