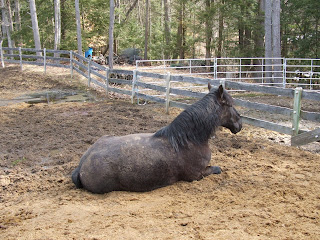 I think spring has actually found the state of Maine today. I headed out fairly early this morning, and was pleasantly surprised at the warm air that met me at the back door. Not, only was this perfect weather here today, but it also arrived on lesson day.... and what could be nicer than that??

"Ol Tonka boy" was enjoying the morning as well, I felt kind of guilty (NOT) about taking him away to do some work!!!!! I think this whole thing of laying in the mud is a way of him saying ..."do you really want to bother riding and having all this mess to clean up?" but, his "trick" didn't work.... that is one good thing about mud, it comes off almost as quickly as it goes on!!!!

Laura decided that we would be riding "outside" for today's lesson. She has worked so hard to get her farm just so, and has a wonderful indoor arena, but also an outside arena. The 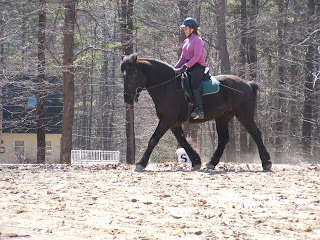 outdoor is so much bigger and gives just oddles of room to work in. Each year we have a goal in mind for Tonka, and have declared this riding season as "the summer of the canter". Tonka is a willing student, but his canter work needs balance, so it will be our big focus.

I often have to remind myself of how far we have come in the four years that I have owned him. He was "broken" when I bought him, but we pretty much decided that it was "quick job to get him sold" sort of training. Laura "warned" me when I bought him, he would be a project, but I was (and am) happy to take that on. The first summer was all about tack.. he is the hardest horse to fit!!! He's quite a bit bigger than horse, and in some pieces not big enough for draft, so it's been a puzzle finding things that fit. I am still not that happy with his bridle, it has been working, but, it is on my list to "up grade"...to what, I don't know. The second summer I had him, I was laid up for most of the season due to some fairly serious surgery.. so, by the time I was riding again, it was mostly about getting fit and getting back into the saddle. Last year's issues were with the trailer!!!! I did do a fair amount of riding, but alot of work was done with loading and unloading.. and of course, we started our driving work with him..... and here we are again, at the start of a whole new season..... 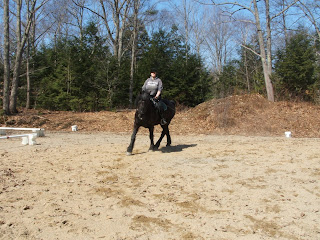 I still get a bit nervous in the "outdoor" arena. There is so much to think about out there.. inside, you have those four sturdy walls, but outside is different. I am always glad that Laura warms him up first, and puts me on when he is a bit on the tired side.

So, I will add that to my list.. ride Tonka when he is fresh in the outdoor!!!! He really is quite sensible, but I am always questioning my own skills. Laura says I am too hard on myself, which might be true, because I do like to do things well.... I don't like being a "newbie" at anything... course, you can't be an "oldie" until you have been a "newbie".... one of those great rules of life .. I guess!!!

So, today has been a grand day with so many blessings in it, that they can't be counted on both hands!!!! And when amazing weather and a ride come together... nothing can beat that.....