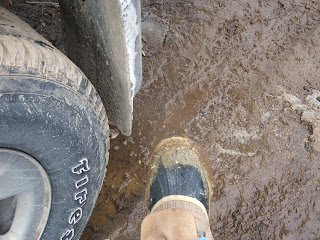 I have a feeling that a month from now, I won't feel quite the same way... but for today... muddy boots were actually EXCITING!!!! With temps reaching the low 50's, the snow dropped a good four to five inches, and the barn yard was a muddy mess!!!
Small price to pay to have such a grand day, and I don't know whether to call it a "bad joke" or a "blessing"... either way, I simply had to be outside most of the day. 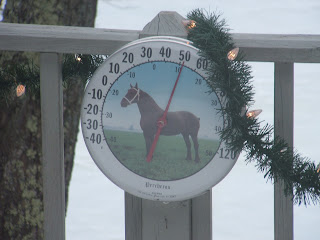 barn apart and did a complete clean up. Not that I haven't been doing chores all winter, but because the day was so nice, it was good to go thru it in detail. We opened both ends of the barn, moved things around and swept out hay, re-arranged, dusted, the whole nine yards... it felt good and the barn looks amazing. 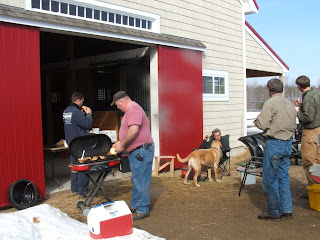 Our friend, Faye, is here for a short visit.. she lives in North Carolina, and came to check on friends . She and brother Bill, put together a fine meal, and we had the first "cookout" of 2009. We invited Ken,Eric, Buzz and Steve to join us, and it was so nice sitting in the sun and cooking on the grill. Almost as good as a "real summer" day. 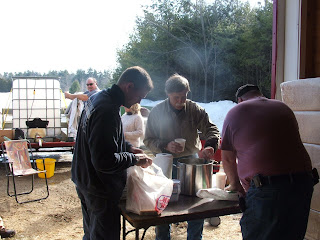 I know we still have March to deal with, and we can get some dandy winter storms in March, but for today, spring came and we greatly enjoyed it... and it's a reminder that winter won't last forever!!! I'm ready... to deal with muddy boots and even those "spring black flies"... bring it on......