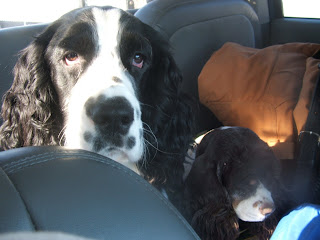 Today was the day that Cooper was meeting his new family!!! So, we loaded him in the truck with Moxie and got on the road fairly early. We were meeting up with Scott and his son in Waterville, and from there, Cooper will be traveling further north to Jackman!!!

Now, I had never heard of Jackman, Maine.. but Cooper had...in fact, he has been there!!! And to try and begin to give you all the details of his story, I fear would take up a whole week's worth of blogging. So, let's see if I can cut it down a little and still have you in awe of how this whole thing has worked out.

As you know, Cooper was a gift to a student of mine from her daughter. In order to help her Mom out, the daughter kept Cooper the first few months of his life to house training and do some obedience with him. These folks have a place in Jackman!!! and when they went on a little trip, they left Cooper with friends in Jackman. Then Cooper goes to my student's home.. we meet, work with Cooper, (he is wonderful...BUT a handful) my student sadly decides that he needs more than she can give him... sends him here. NOW, cocker rescue calls me, but I can't take a foster because I have Cooper... rescue finds out I have a springer needing a home.... and they know that Scott is looking for springer and put us in touch. (Scott also did a lot of work with rescue when he lived down this way...so they know him well).

Scott and I get in touch... he goes on this blog to see pictures of Cooper (falls in love) but also finds out about our place in Acton, and tells me that HE GREW up in Acton!!!!! AND the family that watched Cooper for those few days in Jackman... Scott is good friends with them!!! (they can hardly believe that Cooper is returning!!!) 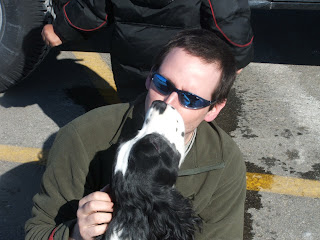 That's a very short version of the story, but let's just say, the world is extremely small!!!!

The moment Cooper met Scott, I felt an instant peace!!! (and yes, began to cry!!!) I just knew from the first second, that these two are meant for each other!!!

I think Cooper approves of his new "owner" from the kisses he gave to Scott. And Scott kept saying "he's so beautiful, I can't believe he's mine!!!"

Scott's little son couldn't have been cuter!!! He kept saying, "Daddy is this our dog??? This is a great dog!!" And Cooper couldn't help but share his kisses with him as well.... 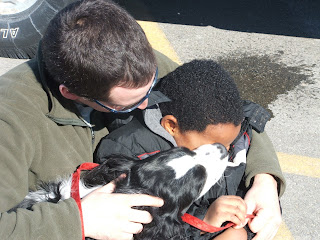 All of us had hoped that we could have lunch together, however,Scott owns hunting cabins and had a snowmobile group coming into tonight, so he had to get back to Jackman. So we had a little visit and a chance to chat before we all had to get on the road again. 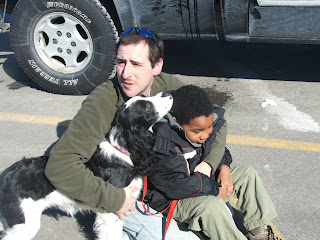 Just before we left, I snapped this last shot of Scott, his son and Cooper, looks like Scott will have a lapful from now on....

As we pulled out, I looked back and saw Cooper proudly sitting in the front seat of Scott's truck...