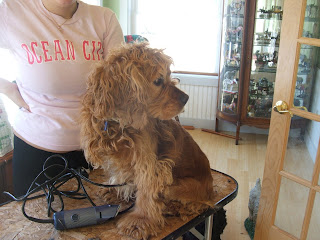 I think we are on a roll with "foster dogs" in this new year of 2008, because it feels like they have been flying in and out of here since the holidays..... this is "Bobby" (our third dog), he is another Maine cocker rescue guy. I picked him up last Tuesday, and today he is heading out to his forever home.

I don't know much about him... except that he was picked up as a stray up in Augusta, he is probably about three years old, and a sweeter boy you could not find!!!!

Because they fly in and out of the shelters pretty fast, things like grooming at not top on the list. When I picked him up, he has just been neutered, so I had to give him the week to heal before we could get these mats off and give him a proper bath. 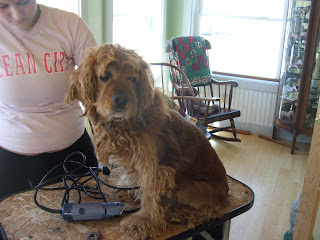 Sadie is so much help to me with these guys. She isn't afraid of any dog and knows just how to hold them for me. Until we get them on the table, we have no idea how a grooming session will go. I am happy to report that Bobby was as sweet on the table as he has been here in the house. He had to have been someone's pet, he is comfortable in a crate, uses the doggie door (hasn't had one accident in the house) and aside from being a little "goosey" with his feet, he was excellent on the grooming table.

When possible, I like to leave a little coat on them, but sadly this boy was too matted to do that. So, it was take him down, and let his coat start all over again. He is in bad need of a excellent diet and plenty of it... he is very thin!!!! He also had quite a battle at 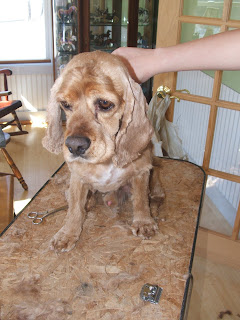 some point and time with ticks, because there are tons of tick scars all over him!!! But he won't have those kinds of worries this summer!!! I have a good feeling that with his new Mom, he will find himself in the pampered pet department for sure!!!!

So here's "our" little guy, a bit on the naked side, but feeling so much better now that he can move about without his hair being pulled.... 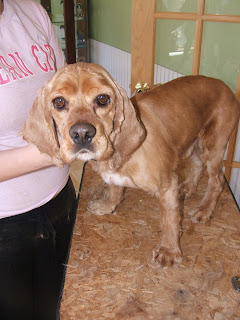