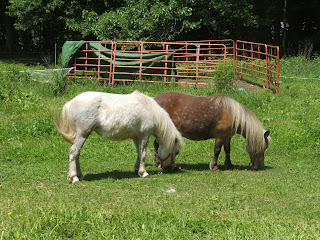 On Saturday evening, we went to dinner with the Flagg's. It was Sean's birthday, and not that we need any "reason" to go to dinner (we go almost every weekend!!!) but it's always nice to "have" a reason to go!!!

Being the "animal people" that we are, the conversation always takes on a theme of pets at some point in time. Dave and Deb have two dogs, two cats, two sheep, and various chickens and the what not, so we always have much to chat about. At one time, they had a Welch pony named Thunder, they owned him for 39 years, and he passed just a few years ago. Since then, they have been on the lookout - more or less - for some sort of equine to add back to their family. I gave them the website for the farm that I got Tonka at, and every so often, Deb pops onto it and takes a look.

She told me, at dinner, that she had seen minis on the website and that there was an open house for the farm on Sunday (yesterday).. so I promptly say... "hey let's go up and see what they have!!!" Now, I know better than to go alone to a place like this, so we took Sadie with us --- for adult supervision.......... 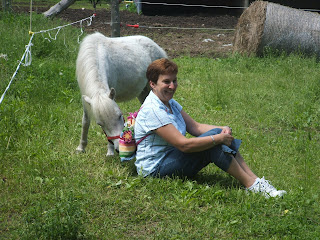 The moment we arrived, Deb and this little grey mini mare, just seemed to hit it off!!! Her name is Alice (like in Wonderland) and she is three years old!!! and I need not lengthen the story with words,,, because you already know.... this little mini is now a "Flagg"!!!

Now, Dave was actually thinking of a horse more for riding and driving. So, he went down to look at the big guys, and found this beautiful Belgian X named Bobby. It wasn't too long before we saw Dave, helmet on, saddle on horse.... off riding "into the sunset" (not really, but it sounds good). Then 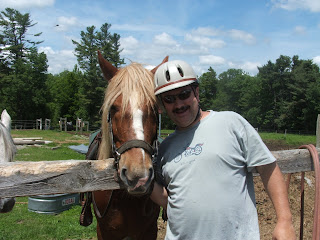 Dave asked if Sadie, Deb or I wanted to try him. So, Sadie and I took a little spin on him, and told Dave we both liked him very much. Well, I need not say more... because Bobby also became a "Flagg"!!!! 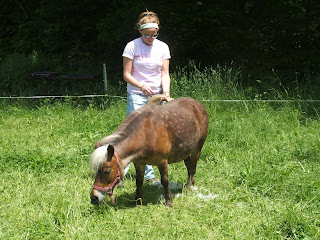 So, now that leaves one little mini left. She is actually the mother of the little grey foal. She is a chocolate dapple, 13 years old, her name is Summer, she can take small children on her back and she drives. Do you all know where I am going with this?????

As it proved out, Sadie was not much in the "adult supervision" department.... nor was Ed!!!! Dave and Deb weren't much help either, because they have offered a place for Summer on their farm until we get ourselves up to Acton.