end of the month (again)

Goodness, here we are at the end of another month!!! I hardly know where all the time goes, and I know that I have said that before!!! I had hoped that we would be talking about moving into our new house by now, but things have changed - as they always seem to do with building projects - and we know for certain, that we won't be in the house this fall. So, keeping with a positive attitude we have decided that it's back to the big camp... most likely for the winter, and talk about the house move come spring. This way, we have the whole winter to work in the house and get things ready, and not rush or stress ourselves with some "must do" time schedule. Is it a little disappointing... sure, but having done some smaller building projects before, Ed and I know that you just got to do, what you got to do.. and let it be... so we are!!!! 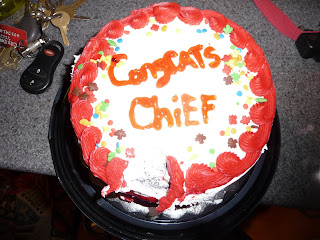 Monday - the 28th- was Ed's first official day as the Fire Chief here in town. He has been so excited for this day, and in just the few days that the "town has been his".. he already knows how much he will enjoy this. He has received a lot of support from not just his new fire company, but many of the town folks, and of course, many of our friends and his firefighter buddies from all over.

To celebrate "his" day, Sadie and I picked up a little cake and brought it home the other evening. Now, you might notice that there is a small "bite" taken out of the cake...

Well, Banjo!!!! Sadie decorated the cake at Kassy's while I was teaching dog classes. Then Sadie and Kas got busy with something else, and not paying attention, Banjo just thought he would "test" that cake for us. silly dog!!!! 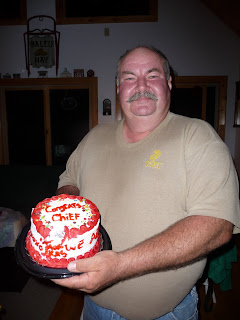 So we brought it home.. and I don't think that Ed really minded that his grand doggie had already had a taste!!!

There will probably be future stories of my Ed as Fire chief....


OK... so I have probably gone a little over the edge when I tell you this next story. Camille for some reason, is in love with COWS!!! Maybe it's because she looks a little like one with her brown and white.. or maybe it's because we have horses and not cows... I don't really know what the thing is here, but she loves them. When I drive over to my Tuesday night dog classes, I have found some wonderful back roads to use, taking us right thru cow country. The moment we turn onto the road, she sits right up and looks and looks for cows!!! Often times, she does get a little too excited and I 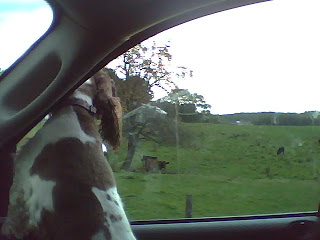 have to speak to her.

Yesterday, I had to run to the grain store before going to class. The tricky thing is, the grain store closes long before I need to get to class.. so, when I do this errand.. I have sometime on my hands.

As we were driving towards the grain store, I saw that in one of our cow fields, the cows were grazing very close to the road. So.. after I got the grain, I thought that if they were still close, I would pull over and let Cam enjoy them for a little while. She was absolutely beside herself.. and even though these pictures aren't great, you might notice that I had to keep the window up some, for fear she would jump right out of the truck to run and see them. 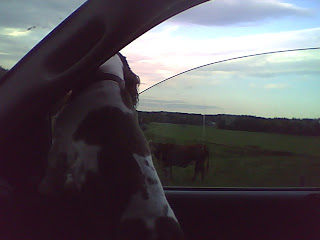 Now, I couldn't have anyone know that I had pulled over so my DOG could watch the cows. so... I got my cell phone out and pretended that I was talking on the phone. I was glad I did, because a number of cars passed by very slowly with the "do you have a problem?" look, and I just waved and smiled and continued to pretend that I was talking!!!!

I know, I know....... I've gone over the edge!!!! But the good thing you can know... If I will stop so my little dog can do some "cow watching".. I will probably be one of "those Grandmothers".. who do all sort of silly things like this for my grandbabies.. and Ed will be showing off the firetrucks....