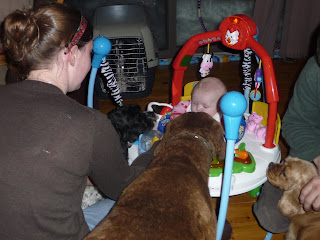 This past weekend, we had a couple of extra dogs in the house (nothing new about that) and especially the fact that it was the "grand dogs".. Kas and Nate had a little trip they had to take, but more on that later.
Abbie has a new "toy".. a "jump-a-roo", it's theme is a farm and it's quite the thing. (where was all this stuff when I had babies??) It's a seat that Abbie can bounce in, to build up muscle tone and condition, and then it sings, and has "activities" and all sort of colors, numbers and the like. She loves to sit in it (for a short time anyways) and being at dog level.. she certainly has company when she is in it. Here we have Tatter, (ever watchful over Abbie) Banjo, Kas and Charlie all playing with Abbie and the jump-a-roo!!!!
Now, about Kas and Nate's "trip"... Nate has a friend that he served with in the Marine corps.. when Nate's term was done.. "Brady" still had a tour to do and was shipped to Afghanistan. Two weeks ago, Brady stepped on an "ied" and was badly hurt. He was shipped to Germany, where he had some surgery on his right leg, and then to the US. He is currently in Maryland, and this past week had to make a decision to loose his leg. I guess he could have tried to keep it, but the experts felt he would have a better recovery if he "let it go" ... I can't even imagine trying to make a decision like that. Brady decided to listen to the advise and his leg was "taken" last week. Well, since he is "so close" to home, you know that Nate just had to go and see his buddy. 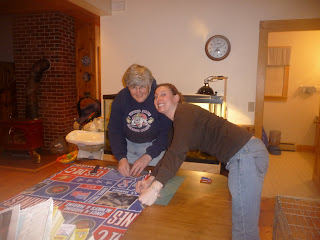 Kas wanted to do something special for Brady and thought that a nice "fleece" would be a good gift. So, Friday evening when they brought the dogs up, she and I did a "marathon" fleece. We actually finished it in record time - two hands make fast work. 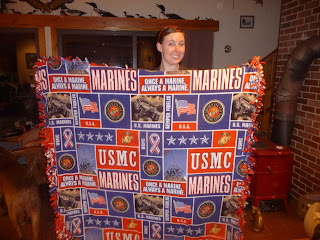 And the finished project~~~~ 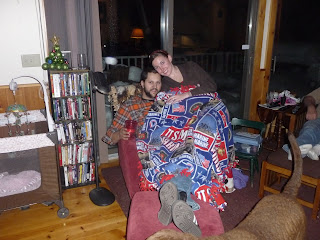 "don't get too comfy under that, it's not yours"

They headed out bright and early Saturday morning, and arrived in Maryland late in the day. They were able to spend the evening with Brady, who.. for all that has happened.. was in good spirits and doing well. Kas called off and on all weekend, they spent a lot of time with Brady, and overall, both Kas and Nate feel that he is doing very well, and has kept his spirits high. He has a long road ahead of him. There will be more surgeries to prepare his leg for a prosiest, and of course, endless therapy. His home is in Mass. so the "kids" will be able to keep good tabs on him and have already planned several visits back and forth.. Brady has already talked of coming to visit them.

I know that there is so much going on the world right now.. Haiti and the like, but please, in your thoughts and prayers.. don't forget our military.. even though the news doesn't give them "front row billing" they are still hard at work and we need to remember them!!!