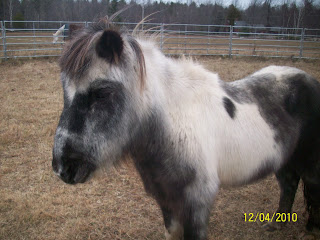 When you leave the kids in charge of the farm.. almost anything can happen. Not that I am (was) worried about any big parties, but I did worry about things like keeping the wood furnace burning, making sure the doggies got out on time, and keeping the barn. Turns out, those sorts of things were the last of my "worries".. I never thought that we would be acquiring another equine!!!!

From what I'm told the story goes something like this.. the Saturday we were in Williamsburg, Sadie gets a knock at the door. A man is standing there telling her that her horses are out and on the main street. Sadie runs to get dressed and heads out the door, only to find our horses happily grazing in our pasture. "They're not mine" she tells the man, but then offers her help. Sure enough, a neighbor's horses are out --- again!!! These guys have a knack for getting out, I've seem them loose a few times myself. By the time Sadie and this man get to the horses, a few other folks have stopped as well. And not too soon after, along comes the owner. 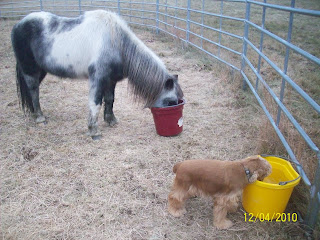 Poor woman is frazzled. Turns out she has already received one fine for horses on the loose.. and today's escape hasn't helped. She is caring for elderly parents, and at the moment doesn't live on the property with the horses, but trucks back and forth each day to care for them. So, when they get out, she doesn't know until someone calls her. And if it's the police...it's a fine. Once she is there, most of the helpers go on their way, but Sadie decides to stay and give her a hand. She tells Sadie that the two brown mares don't even belong to her, and she has called their owners to say that they need to find a new place to stay. Then she looks at the pony and says... "I don't have a clue what to do with you". And then another comment of "put down or send to auction", either the way... a pony needs a home. 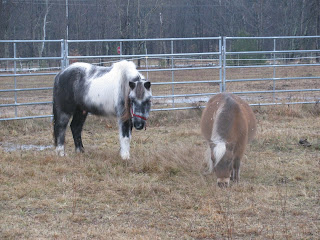 Well, by now, you have exactly figured out where this story is going. Instead of seeing him just shipped out to place unknown, Sadie offers to bring him home. Course the lady jumps at this chance and says... "he's yours". I'm not sure if Sadie exactly expected this, but she came home, got a halter and lead rope and walked him back. 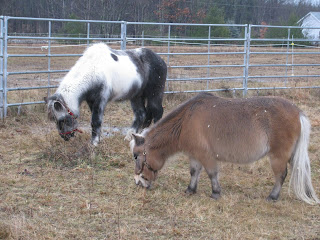 To be honest, I sort of thought that by the time we got home, this lady might have changed her mind and say she gave him away without thinking. But since it's been over a week, I guess that's not happening. He seems like a nice little chap. He has manners (as I have had the vet out to see him), and he's ridable and who knows, maybe he drives. If nothing else, he could turn out to be a nice little riding horse for Abbie or any future grand babies.... OH.. and he has a new name... "Kringle"... in honor of Christmas. 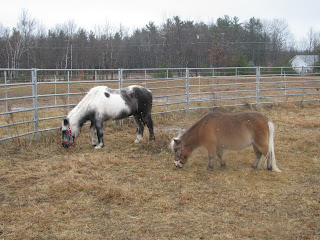 The "problem" is, we really don't have a spot for him. In the best case, he and Mocha will become great friends, and we can house them in the same stall. I've been thinking it would be nice for Mocha to have a buddy, she does get lonely when the big guys move way out in the pasture and she is stuck alone at the barn.
Bit by bit, I have been turning the two out, Mocha, having raised a few babies, knows how to put Kringle in his place, and he has backed off each time. So far so, good.. I think another few days like this and we'll try them together in the stall. 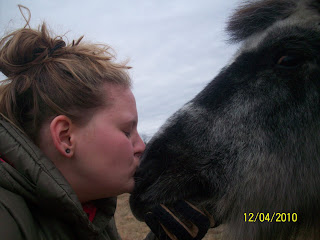 Looks like this picture tells the whole story...
we have a pony on the farm.
Posted by sue at 1:07 PM 6 comments: