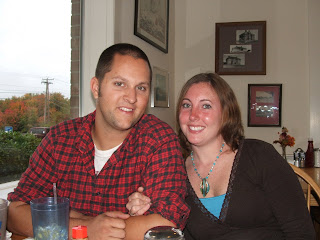 It is hard to believe that today is October, and even more so, that one of my babies is turning 23 this very day!!! Happy Birthday, Kas!!!!

This is the first birthday that Kas and Nate have had together as a couple!!! The first year that Kassy's birthday came around, Nate was in boot camp, the next year.. he was in Louisiana doing clean up work from hurricane Katrina with the Marines, the next, he was some were in the ocean on an aircraft carrier and last year, he was serving in Iraq..... so, for Kas, one of her biggest presents is to be able to celebrate the day with Nate. I...on the other hand.... have been with Kas on every single birthday that she has ever had.... including her very first :-) so, I just couldn't imagine not spending some time with her today. Since she had to be at work and I had a dog student to meet with, we decided that we would meet bright and early for breakfast. Then, because we had the time, we took the dogs for a nice walk.... so, even though it's Kassy's birthday... I got a great gift too!!!! and the dogs really enjoyed going on their old walking route again. 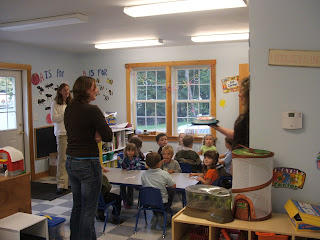 After our walk, I was looking over the painting project that Kas and Nate have going.. and we thought we heard someone calling her name. Peeking out the window, we saw all the kids from the nursery school (across the street where Kassy works) standing out on the steps, and they were calling for Kassy.

When she went out they said, "come over here" and they had a cake for her!!! So, that was a nice surprise and the children were so excited to be a part of her special day. 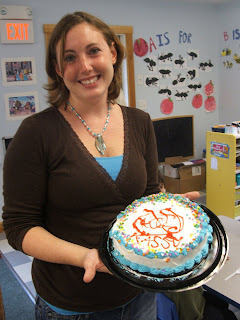 This is the cake that they decorated for "their teacher".....

tonite Kas and Nate are having a small party with their friends... but just having both her and Nate home again, safe and sound.... makes any birthday a special one..