It's been a pretty interesting week around here, we finished getting all our hay in.. which was (is) a big project all to itself. The last load came in Tuesday evening, and since the fire guys weren't around, we called Betty!!! who came after a long day of work to give us a hand!!! How do you say thank you to such a good friend!!!!
It was also a good week for dog training and I had several private lessons. It happens like that all the time, weeks go by without hardy a call, and then I am busier than I can imagine. I felt like I was running the roads all week, but I met a bunch of nice dogs and people, and learned more about the area that we now live in. 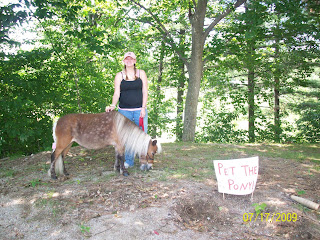 Sadie was busy all week working at our church and helping out with Vacation Bible school. They were so happy to have her, she is very artistic and is great with crafts and such, so that was her focus all week. The kids loved her as well. On the last day of "school" they had a carnival for the kids.. earlier in the week, Sadie had offered to bring Mocha for the kids to see and to be a part of the carnival. Sadie asked me if I could run her over on Friday, but with my private students, i didn't see how I really could. So, she decided that she would just have Ed bring Mocha and Sadie would handle her. At first some of the VBS folks were unsure about Mocha... but they finally decided that it would be OK and once they met her, they loved her.... as did the children. I was sorry to have missed out 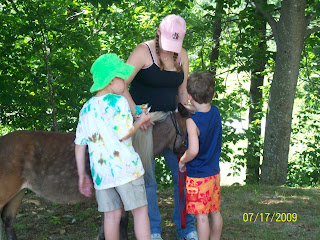 on it, but Sadie said Mocha was as good as ever. I think the kids were a little disappointed that they couldn't ride her.. but we are very careful about how much weight we put on her back, so it was just decided that no one would ride instead of saying that only little ones could. 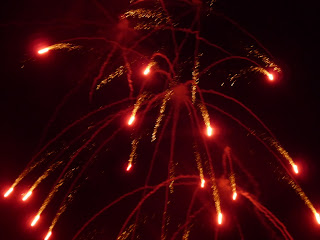 Friday evening we went to Deb's and Dave's for a cookout and then onto the fireworks. The fireworks were suppose to happen on the 4th, but due to bad weather.. they had to be postponed. While we were having a cookout at Deb's and Dave's, a shower came thru and I began to wonder if they would be postponed again... but they weren't. Actually it was a prefect night for fireworks, because the cloudy sky made them look closer and brighter. The bugs weren't too bad, and we had a great time all together. After that we made an ice cream run, and Sadie, Ed and I didn't get home until midnight.... it's been quite a while since we have been 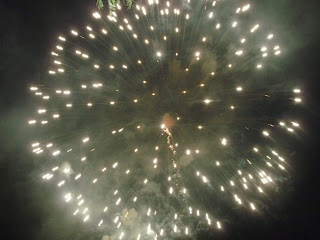 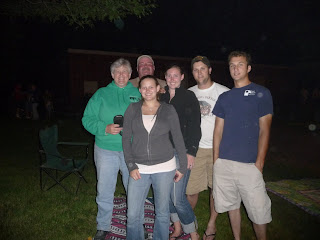 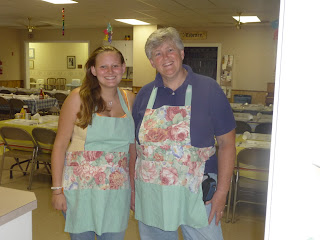 Tonite, the three of us worked at the church's bean supper. It was great fun, we have such a nice group of people in our church!!! The crowd wasn't as large as they had hoped, and I actually think the weather was against us.... it was a beautiful sunny (hot) evening, and I suspect that most people were probably outside or having their own cookouts in the nice weather. But all in all I think it was quite a success, and we certainly enjoyed our supper after we were done "working". 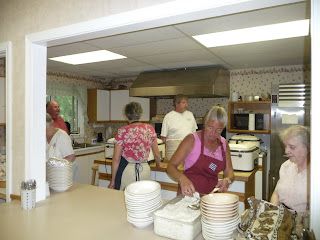 After the supper, we went to the barn for a while. Betty popped over, and we hitched Mocha to her cart. Dare I jinx myself in telling you that she was absolutely wonderful in her cart this evening. We took turns driving up and down the driveway (we stayed out of the field because it was so buggy).. she went along like a little trooper. Even in her turns, she was "even" and her "whoa" was a dead stop. If this keeps up, it will be time to work with her "off the farm"... I keep thinking it would be great fun to drive her up and down the camp road.. but I want to be sure her "skills" are well in place before we go to far.
Weather wise, it's been a grand weekend so far.. so, I hope those who are needing to finish up in the hay fields got some time in
Posted by sue at 7:10 PM No comments: